Welcome back to my blog series Making the Game, in which I talk about the process of creating my card and dice game, Chaos & Alchemy. Today, it’s time to talk about getting people interested in the game.

I’ll be the first to admit that I’m not a natural salesman. I have a good head on my shoulders and am easy enough to get along with, but I’m not someone who will naturally draw people in and make them want to buy whatever I’m selling. Still, when you run your own company and have a good product (even if it’s a game), you have to be able to get the word out if you plan to actually get people to buy it.

Because I had so many parts moving at the same time, I had to figure out marketing while I was still developing the game itself. It’s not an easy task to market a product that you don’t yet have available for sale! But it can be done.

Frankly, the blog series you’re reading right now is a form of marketing. Those of you who read my blog regularly and like my style might be interested in a game written and developed by me. I don’t want to force Chaos & Alchemy on my blog readers, and I do intend to keep writing about Dungeons & Dragons, but I realized early on that I was putting a lot of my gaming energy into my new card and dice game, which meant that there was little left over for D&D.

Also, I write my blog because of passion, not because of some goal of being hired as an RPG writer or anything like that. Since I’m passionate about my new game, I’m writing about it! No one has complained so far, so I think I’ve done an okay job of balancing “Here’s something else I’m passionate about, even though you probably started reading my blog for D&D stuff” with “Here’s some D&D content, too.”

With a new game and a new game company, I was going to need a web site for it. I did the first part of this fairly early on, registering a bunch of domain names related to my game, but I didn’t start a real site right away. Once I was ready, I called up the company I use for hosting here at onlinedungeonmaster.com and learned that the simplest approach would be for me to upgrade my existing web hosting account to allow for multiple sites on the same account.

The web site for Chaos & Alchemy came in fits and starts. At first I was hosting it at claycrucible.com, since the name of my game company is Clay Crucible Games. However, I made a marketing decision that I didn’t really care so much about the Clay Crucible Games brand, at least not now, since the focus should really be on the game itself. Thus, I migrated everything to ChaosAndAlchemy.com.

At first, I just had a simple home page. Since I’m familiar with WordPress from this blog, I installed it for use on the Chaos & Alchemy site as well. I used the logo that Bree, my awesome graphic designer, had put together for the banner at the top of the home page. I wrote a few lines describing the game and left an email address as a “for more information” link.

Then, as I started getting actual content, I started adding pages to the site. When artwork for the cards started coming in, I added an Art Gallery page. When I was ready to accept pre-orders, I added a tab for that. Sample cards. Rules. Print-and-play cards. FAQs. Even a page with a link to all of these blog posts for people who want to read about how the game developed over time.

The web site is obviously important from a marketing perspective because it’s the only way I have right now to let people actually buy the game. It’s also the way for people who are curious about the game to figure out if they want to buy it or not by letting them see the rules, the cards and the artwork.

I should note here that I intentionally decided to take a very open approach to my game on the web site. The full rules are available for download with all of their glorious formatting, as is a set of print-and-play cards for people who want to try the game out and don’t mind a little arts and crafts work. The print-and-play cards don’t have the artwork and formatting, but that’s intentional – there has to be something special you get for actually buying the game aside from a box and dice! 🙂 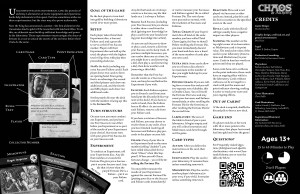 The rules look beautiful; this is the inside of the booklet.

I don’t have a ton of Twitter followers; I just passed my first demi-milliwheaton (250 followers), but I have enough that makes it worthwhile to let folks know about the development of my game. I try to make sure that my Chaos & Alchemy related tweets are something I think will interest my followers; stuff about game development, calls for playtesters, announcements about new stuff they can check out, etc. I try to be sensitive not to flood my feed with marketing, but I know that I have followers who are interested in the game.

As with lots of marketing, it’s a fine line.

I have a personal Facebook page for friends and family, most of whom are not gamers. Still, I popped onto Facebook with the occasional post about my game, mainly focusing on how excited I was about it. I did let people know about pre-ordering, and I was surprised to see how many non-gamer friends and family did so, just to support me. I have awesome people in my life.

Suffice it to say, this is not a marketing channel I plan to use much any more now that the game is done and I don’t have tons of exciting announcements about the thrill of development. But if anything changes with the game (expansions, etc.) I’ll mention it for folks who might be interested. I’d rather my customers be mostly gamers rather than just kind friends and family in the end.

This is one that I knew about but that I waited to get involved with until the game was done. I’m glad I finally jumped on board, though, because BoardGameGeek is a community that’s great to be a part of. I’ve found it enlightening just to read the forums over there.

Once I was ready to talk about Chaos & Alchemy on BGG, I started a thread in their Board Game Design forum where I mentioned the game, talked a bit about it and linked to the site. I was encouraged by the folks on that forum to submit my game to the BGG database, where it has now been accepted and even expanded upon by other users (another kind user submitted a link to the game rules).

Intriguingly, BoardGameGeek was also how I was contacted by a person from a well-established game company asking if I would be willing to swap a copy of Chaos & Alchemy for a copy of one of their games. Having a game publisher approach me to say that they wanted to get their hands on my game… well that’s pretty cool! My game was also added to a list of “games debuting at GenCon.” Which brings me to…

As I mentioned in an earlier post, once we realized that Chaos & Alchemy had actual potential, my wife told me that I should go to GenCon to show it off. While I plan to find open tables and drape my banner over them, demoing the game to anyone who’s up for it, I thought it might be good to spread the word a bit more as well.

The banner I’ll be displaying at GenCon

First, I happened to hear about the GenCon Social on the Jennisodes podcast. This is an event that’s mainly for RPG podcasters rather than card and board game players, but it sounded like a fun event. If I were to pay some money to sponsor the event, I could put some kind of advertisement in the goody bag that will be going to folks who come to the dinner. I thought it might be fun to put a card from my game in the bag, and I hit upon the idea of creating a special GenCon promo card. Every attendee at the GenCon Social will get two Chaos & Alchemy cards – one random card from the game with normal black and white art, and one special GenCon 2012 promo card that has the web address in the flavor text. The promo card also has color art (which looks amazing, I must say), but I’m going to hold off on showing you that card until GenCon itself.

I’ll mention here that anyone who buys a copy of Chaos & Alchemy at GenCon will also get the promo card (while supplies last).

The other sponsorship I decided to participate in for GenCon is the This Just In From GenCon podcast. I’ll be appearing on the Thursday evening podcast from the convention. I’ll be curious to see if this actually results in anyone discovering my game!

Also, if I get the chance to see Wil Wheaton while I’m at the convention, I’m totally giving him a copy of the game.

Past GenCon, I have no idea what I might do for marketing Chaos & Alchemy. If the game doesn’t really succeed, I probably won’t do much. I’ll leave the web site up, and that will be it. If it does succeed, well, who knows? A Kickstarter to do a bigger print run with color illustrations would be my dream, but I have no idea if that’s going to happen. We shall see!