Deprecated: Return type of Requests_Utility_CaseInsensitiveDictionary::getIterator() should either be compatible with IteratorAggregate::getIterator(): Traversable, or the #[\ReturnTypeWillChange] attribute should be used to temporarily suppress the notice in /home/b2omeohdmp46/public_html/wp-includes/Requests/Utility/CaseInsensitiveDictionary.php on line 91
 Making the Game part 9 – Production | Online Dungeon Master
Skip to primary content

Welcome back to my blog series Making the Game, in which I talk about the process of creating my card and dice game, Chaos & Alchemy. This is the final part in the actual making of the game – getting the physical item produced.

Chaos & Alchemy is a fairly simple physical object as games go. It consists of:

Each of these items needed to be sourced in a way that met my standards for quality but was as inexpensive as possible.

I have one word for you when it comes to boxes: Uline. I spent time thinking that I was going to use a little jewelry box from the Container Store, or possibly getting something custom printed from All Packaging Co. or something like that, but no. It was Uline. They have tons of choices, and they’re even happy to send you samples if you’re trying to decide among different options. 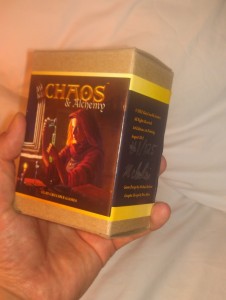 I’ll note here that I also got my dice baggies from Uline. Did I mention that they’re awesome?

As a role-playing gamer, I’m very familiar with Chessex when it comes to dice. I liked what they had to offer, and they offer discounts for bulk orders like mine, too. I didn’t want to only talk to one company, though, so I also reached out to Koplow.

Koplow was good in that they were willing to send me some samples (I had to pay for my sample dice – and shipping – from Chessex). However, their selection isn’t as broad as Chessex’s. Specifically, I was able to get some really sweet black dice with gold spots from Chessex, which went perfectly with the color scheme of the cards in my game (the card back and the dice go beautifully together). Koplow didn’t have that color combo.

Even though Koplow would have been a bit cheaper, I went with Chessex, and I think it was the right call for me.

My graphic designer, Bree (I’m telling you, game designers – hire her!), knows her stuff in the graphic design world, and she found some high-quality glossy label paper that I could use for my box. She designed the label itself, too – using the awesome cover art from Chris Rallis on the front, with a blurb about the game on the back, the ages / time / number of players on one side, and legal info / credits on the other side.

We had considered lots of different packaging options; for a long time, I thought I was going to be using a two-piece box with a belly band. Ultimately, though, the 4″ x 3″ x 2″ flip-top box from Uline was the perfect size for the cards, dice and rulebook, and a belly band made no sense. The sticker option was perfect.

The tricky part was actually getting the darn things printed. I wanted the quality to be excellent, so I wanted them done on a color laser printer, which I do not happen to own. After calling some different print places, I decided to go with Staples.

Staples had a little trouble with the PDF I was using for printing, apparently because Bree had created it on a Mac and their system was Windows. I was getting slightly off-color backgrounds to the text boxes on the label (and the rules sheet). The solution was for me to open the PDF in Photoshop Elements on my Windows computer and save it as a new PDF. Voila – no more weird background colors.

The PDF is formatted to do two labels per 8 1/2″ x 11″ page, which meant that they needed to be cut out using a paper cutter. My awesome wife Barbara handled all of the label cutting. I applied the labels to the boxes (very carefully) myself.

There was a point after we had decided on the compact box that Bree and I thought we might go with a tiny little rulebook with a whole bunch of itty bitty pages. Ultimately we thought better of this and went with a single 11″ x 17″ sheet of paper that would be folded in half to form a four-page booklet, which could then be folded into ninths that would slide perfectly into the game box.

Bree designed the rules sheet in color, but did it in such a way that it would still look good in black and white. I really wanted to have color rulebooks for Chaos & Alchemy, but boy howdy is that expensive to print! I went with black and white here.

I had Staples print these, too, and we had some miscommunication about the price. If I had it to do over again, I would have gone with Fedex Kinkos for the black and white rule sheets. Live and learn.

For folding, my wife and I each got a bone folder (something I previously knew nothing about; apparently it’s used in scrapbooking) to make nice, precise folds. After doing one right, we had a template to work from, and things went swimmingly. We knocked out all 125 of these things in about an hour and a half.

I saved the big one for last. Chaos & Alchemy is fundamentally a card game, which meant that I needed to have some high-quality cards printed. I wasn’t sure how to do this, so very early on I reached out to Rod Waibel of Sacrosanct Games. I had backed Rod’s Kickstarter for Compact Heroes last year, and I figured that he might have some suggestions for me. 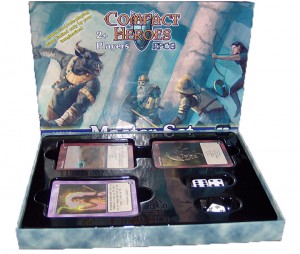 Rod came through like a champ (hence his credit as a “production consultant” in the rulebook). He pointed me toward Superior POD (print-on-demand) for small print runs and a company in Asia for a large print run if I get to that point.

Ah, Superior POD. I have such a love-hate relationship with them.

Ultimately, I went with these guys, and I got my cards, and they look great, and I could afford them. I didn’t go with their card boxes, but that’s okay – I found another source (there’s this place called Uline…). The card crookedness isn’t a deal breaker; it’s a little less professional than I’d like, but it’s way better than I can do myself.

The customer service, though… wow. As I said, I had an awesome experience with my first one-off order when they fixed an error they had made very quickly. But ever since then, it’s been a nightmare.

My second one-off order, with the final card images, was a mess. I paid extra to have one-day turnaround, and two days later I got an email in the afternoon telling me that there was a problem and that I’d have to re-do my files. This meant that I ended up getting three-day turnaround, and some snippy emails from customer service in the process (granted, I was a bit snippy at that point myself).

My main order was nearly a nightmare. I don’t want to go into all of the details here, but suffice it to say that I went out of my way to try to do everything perfectly, and I was met with absolute silence until it was too late. I got my cards almost a week later than I should have, and then there were issues with the shipping charge…

But you know what? I got my cards, and they look awesome. I had a lot of stress along the way, but the final product is great, and I’m a happy customer.

I would recommend Superior POD as a company to work with for small print runs like mine, but I would caution you to build it plenty of extra time to the process. Fortunately, I had left myself eight days of wiggle room, and while I needed six of them, it all worked out. 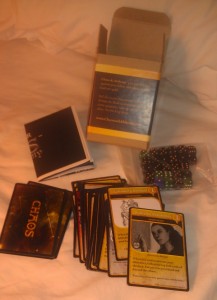 This game comes with everything you see here!

Since I did so many pre-orders, I’ll say a few words on shipping. Single copies of the game are shipped in bubble mailers. Multiple copies (2-4) are shipped in cardboard boxes I have lying around (I’ll often make a box that’s the right size by cutting down a larger box). More than that (5+) go in a medium flat-rate box from USPS. Single copies weigh only 9 ounces, so I use first-class mail. Multiple copies are over 13 ounces, which means either parcel post or priority mail, so I’ve been springing for the priority mail option. It seems to have gone great, too, so I plan to stick with it.

And there you have it! The nitty gritty of production. I’ve shipped out about 50 games, delivered a few more to friends in Colorado, consigned some to an FLGS in Colorado, brought a few with me to Indianapolis to deliver to folks who pre-ordered for GenCon delivery, and brought the rest along to try and sell here at GenCon.

P.S. If you’re at GenCon and want me to demo Chaos & Alchemy for you, send me an email at onlinedungeonmaster@gmail.com or watch my Twitter feed for updates on where I am at what time!