Just a quick update since I haven’t written in a while.

GenCon was an awesome experience. The highlight was getting to meet so many of my friends from the online D&D world, mainly from Twitter (d20Monkey, Jennisodes, LawOfTheGeek, deadorcs, FELTit, GeekyLyndsay, d20Blonde, Squach, TheIdDM, SlyFlourish… the list goes on and on). A lot of these were at the Thursday evening GenCon Social, with more coming at the Saturday evening recording of the Tome Show and dinner afterward.

I sat in on several seminars during the convention, with the highlights being a Kickstarter panel, the Law of the Geek panel and a panel on board game design.

I was on an episode of This Just In From GenCon as a sponsor.

I did some informal demos of Chaos & Alchemy in the general gaming areas with some good success. I was only able to do about 30 or so demos over the course of the weekend (not having a booth makes it hard to do that sort of thing), but 10 people did end up buying the game after playing it – a pretty good conversion rate! It was enough to make me want to keep going with this thing, and I’m currently talking to some small publishers and also doing the research about maybe running a Kickstarter for a big print run.

I’ve learned that my Wednesday bowling league that usually keeps me from running D&D Encounters in the fall and spring is going to be on Tuesday instead this year, which means that I’m DMing Encounters again. Yay! No write-up for this week, except to say that my table full of evil drow did a good job of role-playing. They’re scheming and backstabbing and having a lovely time. 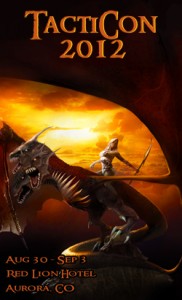 Now I’m on the eve of TactiCon, one of the two local conventions each year. I’m running Fiasco tonight, followed by two days of Ashes of Athas (the D&D 4e organized play set in Dark Sun). I’m going to try to find time on Saturday between Dark Sun games to demo some Chaos & Alchemy as well.

So, I’m still out there, still gaming, just very busy!