Labor Day weekend has been a lot of fun for me the past three years, as I’ve been attending TactiCon. This is the smaller of the two conventions put on by the Denver Gamers Association each year (the bigger one is Genghis Con over Presidents’ Day weekend in February), but the 2010 edition was the first gaming convention I ever attended, so it always has a place in my heart.

I’ve done the “Marathon GM” thing in the past, where I run a D&D game in all nine of the convention’s four-hour slots over the weekend, but I was taking it a little easier this time – only being signed up for seven. Yes, I’m still nuts. 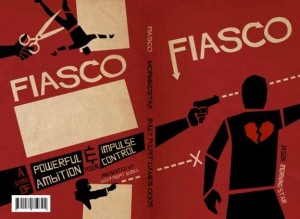 Thursday night, I had signed up to run a session of Fiasco. I had only played once before, but I think it’s a cool system and one that I want to get more comfortable with. I’ve been playing around with creating a playset of my own, but since it wasn’t ready in time I just brought the four sets from the base Fiasco book, plus the D&D-themed set, the rock band set and the set played on Tabletop a couple of months ago. My players, two of whom had never played before, opted for the Antarctica set. Since there were four other players plus myself, I decided not to participate as a player, instead just helping them along. I think Fiasco plays best with four.

The players had a good time, setting up a web of relationships and secrets. Things were going swimmingly until the radioactive penguins started growing tentacles at the end of Act One. Amazingly, the players all rolled pretty well by Fiasco standards at the end of the game, so none of them ended up dead and one ended up coming out smelling like roses. We finished in under two hours, too, which was great – I still had a little prep for the rest of the weekend’s games to finish.

Friday was Ashes of Athas Day One. I was running the three adventures from Chapter Three of the Dark Sun-set organized play campaign. I was delighted to discover that three of the guys whom I’d run Ashes of Athas for back at Genghis Con had returned, and they were stoked to play at my table again! They really made it fun for me last time.

This time was no different. With my projector setup running (and attracting lots of admiration from passers-by, as usual), we kept the fun flowing all day long. I felt bad for my core three players when they were bumped to another DM’s table for the middle session, but the reason was that we had a group of new-to-D&D players and the organizer knows that I love running games for new players (and that they tend to keep coming back after they’ve been at my table). I did love the new folks, too. Something about new players just gets my energy up.

My core three players were back at my table for the final adventure of the day, and it was mostly a big, two-part combat encounter. The second part had a very interesting environmental effect: Any PC starting or ending a turn in a zone of evil ashes had to make a death saving throw. This was in the Athasian plane of death, so it made sense. The cool thing about this was that it made it possible for a PC to die while still at full hit points, but not randomly out of nowhere as in a pure “save or die” effect. It really affected player tactics once they found out about it, and made things tense when they otherwise might not have been.

Fortunately for me, he was wrong. Saturday morning, we had three DMs and three players. Easy solution: I would bow out, one of the DMs would play and the other DM would run a table of four! This let me get some much-needed coffee, check out the vendor hall, and then start showing people how to play Chaos & Alchemy. 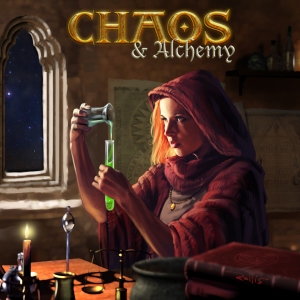 My lovely wife came to join me in the demos at noon, and she was very eye-catching (like I said, she’s lovely). We had two tables of demos running non-stop, with lots of folks deciding to buy a copy of the game. One guy started telling all of his friends that they needed to come try this game, and I believe four of them bought copies. One of THOSE people also sent another buyer my way! Players are teaching one another to play the game.

A guy who owns a very new game retail store bought a copy and asked about carrying Chaos & Alchemy in his store. Two guys turned out to be involved with the organization of Denver Comic Con and wanted to talk to me about having a table at next year’s convention, with a “local game designer” angle on it. There was a lot of enthusiasm, and I ended the weekend with just 25 copies from my original 125 copy print run on hand. It’s off to a really good start!

As you might guess from all of that, I was able to spend most of the afternoon running Chaos & Alchemy, in part because there were only two tables worth of players for Ashes of Athas and the other two DMs ran the games. However, when the evening time slot came around, we had two tables of players but one of the other DMs was nowhere to be found, so I set up the projector and ran the adventure.

The players for Saturday night were the same six I’d had for Friday night. The adventure was the conclusion of Ashes of Athas Chapter Four, and it was my least favorite of the Ashes of Athas adventures I’ve run so far. It was really long, with too many skill challenges and combats for a standard convention time slot, and one of the combats ended up wiping out the other table of players (my table had a very hard time with it). We still had fun at the table, though. The party didn’t mind when I switched to some brief narration rather than actually running through some skill challenges, and they rolled with the bizarre “desert peyote trip” ending of the adventure.

This adventure also gave me my favorite gaming moment of the convention, when a new player who was running a spear-toting Ardent was trying desperately to figure out what she could to to help her allies while she was standing on a bridge and the gargoyle menacing them was 20 feet below her. Answer: Jump off the bridge, spear pointing down, and hope for the best. I gave her a +1 bonus for charging (sort of) and a +2 bonus for combat advantage (the gargoyle did NOT see this one coming!), and ruled that if she hit with the attack, it would count as an automatic critical hit. 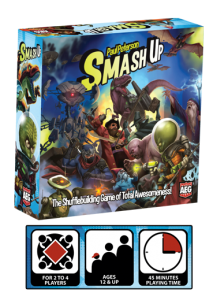 I had nothing scheduled on Sunday, which was a first for me. I decided to sleep in, have an early lunch and get to the convention around 11:15. I got in on a game of Smash Up, which I knew had been a big deal at GenCon. I love the theme of the game – you play with a 40-card deck that’s made up of two 20-card decks smashed together to give you something like Alien Dinosaurs, Ninja Tricksters, Zombie Pirates or Robot Wizards. The mechanics of piling up minions and playing actions to take down some shared bases, with points awarded based on who contributed the most to breaking the base, were pretty good. The balance seemed fine, too, with the final score being 15-11-11-8 (I was one of the 11s).

However, I just didn’t have that much fun during the actual gameplay. The Robot Wizards, for instance, had really long, involved turns. The Ninja Tricksters got to do interesting things at unexpected times. The Zombie Pirates both had things popping out of the discard pile. The Dinosaur Aliens… were big. And they could return things to players’ hands. My turns were short and a little boring. It’s a game with lots of potential, but it didn’t quite do it for me.

I ran a couple more demos of Chaos & Alchemy, then headed over to the D&D area to see if maybe I could play in a game in the last time slot at 2:00. The organizer asked if I could run something instead. I didn’t have my laptop with me, even though the projector and rig were in the car, but since I’d never tried running module cold, I agreed to go for it.

I was loaned a wet-erase mat and marker and was seated at a table that was mostly empty, since the players (mostly kids who were friends and family of one another, with one adult) were apparently in their rooms leveling up their characters. Once I realized that they didn’t care what module they played, I decided I’d run one that I wrote – The Stolen Staff. I downloaded it from my blog to my iPad. I used the backs of business cards for initiative trackers. I wrote down monster hit points on a sheet of paper. I borrowed some minis from one of the players to represent the monsters.

And we had a rollicking good time! I soon realized that these kids really just wanted to fight stuff, so I gave them plenty of interesting things to kill. We had gotten off to a really late start, but we still fit in three fights and some role-playing, finishing on time. I did have a weird moment afterward when one of the kids asked me, “So who did the best?” I didn’t understand the question, so he clarified, “Who did the most damage and killed the most monsters? Who was the best?” I told him that my favorite moment was when one of his friends had his character jump off a tower to land on a minion (I guess I have a thing for PCs throwing themselves off of stuff). Maybe he’ll get the message that D&D is about creativity, not just numbers. Here’s hoping. It was a very min-maxed party, so I’m guessing I won’t change any opinions, but so it goes.

Once all was said and done, I still wasn’t quite finished. A couple came up to me as I was packing up from my last game and asked if I was Michael (I am) and if I could teach them about Fiasco. Apparently they had bought the game and weren’t confident in jumping in, and they had seen my name in the program as someone who had run Fiasco. So, after the GM appreciate ceremony, I met up with the two of them and taught them about Fiasco before heading home.