Welcome back to my blog series Making the Game, in which I talk about the process of creating my card and dice game, Chaos & Alchemy. Today, I’m going into more depth about the playtesting process over the course of my game’s development.

I came up with the idea for what would become Chaos & Alchemy on the last day of May, and within a week I had made the decision that I wanted to have this game available for sale at GenCon in mid August. This meant that I had to start moving on a lot of different projects all at once in order to make this happen – legal stuff, graphic design, artwork, production details. And since the game had only existed for a week at this point, I still had plenty of playtesting to do.

In an ideal world, it would probably be best to completely playtest a game before moving forward with any of the production details, but I didn’t have that luxury. That was okay, though, since I had the basic framework of the game nailed down and could start ordering art and graphic design right away. If the text of the individual cards changed somewhat, I would still be able to use the illustrations and design elements I had ordered.

The first wave of playtesting was purely internal – me and my wife. We played just a handful of games, enough to convince me that the game was worth investing more effort.

The second wave of playtesting was with close friends – especially my friend Nate, who is a professional game designer. His feedback was particularly useful in helping me focus on what makes Chaos & Alchemy fun and what was getting in the way of that fun. Playtesting a game is a lot like editing written material; the goal is largely to cut out the crappy parts to let the good stuff shine through. Yes, you’ll occasionally need to add something entirely new as the result of playtesting, but if you’ve got a fundamentally good game you’ll probably spend more effort getting rid of what’s not working.

My brother Danny was also pivotal in this second wave of playtesting. He was very excited about Chaos & Alchemy even before I had the whole alchemy flavor, and he took it upon himself to print out updated cards as they became available, trying the game with multiple groups of players with varying levels of game experience. This helped me to figure out who the target audience for Chaos & Alchemy is (basically, people who aren’t gamers at all probably won’t want to start with this game, but anyone who likes games already will probably grasp it immediately).

Side note: This past weekend I was in Pennsylvania at Danny’s wedding; please join me in congratulating him and his beautiful bride, Jill! We had a blast, and it was awesome that Danny and his friends and our family could be the first to see the final Chaos & Alchemy cards in print with me.

The third wave of playtesting was with a broader swath of people online, plus some in-person testing with strangers myself. On my end in Colorado, this mainly involved hanging out at the friendly local game store (thank you, Enchanted Grounds!) and seeing if anyone wanted to try my game. A few of my D&D players were up for it, as were some other random folks I met at the store.

The online part of this playtesting involved some friends in New York and Florida plus some hearty Twitter volunteers who expressed interest. I had five Twitter followers who said they wanted to be playtesters, and I ended up getting actual playtesting feedback from three of the five (not a bad rate, frankly, given the level of effort required to print out the cards). 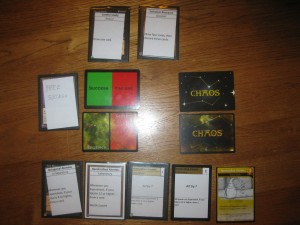 So what was I looking for from playtesting? I kept my requests broad. Fun was the focus. I asked folks to tell me what they liked and didn’t like. Were there cards or rules that were especially confusing? Was any part of the game just pointless? Were there any cards that felt bad to have in hand? What suggestions did they have to make the game more fun?

I received tons of great feedback, most of which I incorporated in subsequent iterations of the game. My New York friends suggested some kind of playmat to keep track of Successes and Failures, which evolved into the Success/Failure cards included with the game. Lots of folks asked questions about cards that were unclear in play, which became edited (or rewritten) cards and FAQ entries. I received ideas about how to make the endgame less abrupt and more fun, which became a succession of different endgames before finally ending up at the simple “race to 10 points” base rule plus an optional “Transmutation for the King” advanced rule. 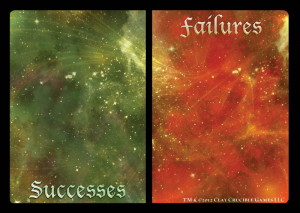 Bottom line: My playtesters were awesome. Friends and family and helpful strangers all took the time to build their own card sets, try the game, and provide detailed feedback. It made a huge difference, and the final game is much better for it.

P.S. I’ve now made the “print and play” cards for Chaos & Alchemy available to anyone who wants to try them, just like my playtesters did! These cards don’t have the fancy formatting, illustrations or flavor text of the actual cards, but they have the rules that you need to try out the game to decide if you want to buy it. The pre-order period will last until the morning of July 24 – one more day from the time this post goes live! After that, the 10% discount will go away and I’ll take orders at the regular $25 price, still with free shipping to US buyers. Check it out, and place an order if you like the game!