Welcome back to my blog series Making the Game, in which I talk about the process of creating my card and dice game called Chaos & Alchemy! In Part 1, I discussed the inception of the idea for my game and the first prototype I built and played with my wife. 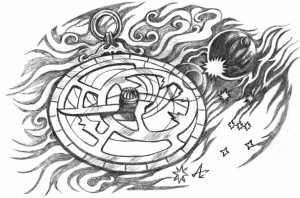 Two days after the inception of my game, I found myself getting together with some acquaintances for a public playtest of D&D Next, which had just become available for testing about a week earlier. We had a little time to kill before one of our players would be showing up, so I broke out the cards that I had printed up and tried the game with them.

One of the guys totally got it. The other was pretty confused, but soldiered on. It was encouraging enough for me to feel like I should keep working on the game, but I knew that I needed it to have an actual theme rather than raw mechanics. My wife had already suggested something fantasy-ish, and I liked the idea of alchemy for some reason.

I spent a fair amount of time on Sunday, June 3, changing the generic names of cards like “Draw 2” and “Roll Extra” into things like “Quick Study” and “Oversized Cauldron”. I changed the references of cards being “in play” to being “in your laboratory”. A theme was taking shape!

Talk to the pros

I’m lucky to have a good friend who has worked for many years as a professional game designer on board games, card games and computer games, and I got together at his place with him and another friend of ours Sunday evening, June 3, to playtest the heck out of my still-nameless game. I didn’t realize that these guys would be up for three hours of solid playtesting, but that’s exactly what we did.

This was real playtesting at its best. We tried the game as I’d originally designed it, then talked about what was working and what wasn’t. In the initial rules, players had three things to do each turn: draw a card, play a card, and run an experiment (rolling a pair of dice) which could result in extra card draws and plays or in some forced discards (or a mixture). We started toying with this, going to a single draw/play option each turn and adding an extra die to the experiment (now rolling three dice instead of two). This changed things dramatically, making it much more likely that the target die (now renamed the Fortune Die) would change with people rolling doubles since doubles come up a lot more with three dice than with two.

We started focusing on what was fun in the game and what wasn’t. At this point, the main way you could win the game would be to get to 10 points by holding a bunch of cards in your hand – each card in hand was worth a point. This was rather unfun; playing cards to the table was cool and exciting, but just hanging on to a bunch of cards felt kind of lame in comparison. This was a change that would have to be handled at the drawing board rather than at the table, though.

Another issue that caused problems was that the game ended rather suddenly and randomly a lot of the time. If your opponent goes from 5 points to 10 points via a lucky turn, well, that’s it. I started experimenting with rules that said, “If one player ends his or her turn with 10 or more points, each other player gets one turn and then the game ends.” This had the problem of making it BAD to be the first to 10, since everyone else would dump on you. Tricky.

I left that evening with tons of notes and useful feedback, and I got to work. Changing the point mechanism from cards in hand being the main victory condition to cards in hand being worth nothing was surprisingly easy. Lots of cards that previously were played, had their effect and then went to the discard pile became cards that came into your laboratory, had an effect when they came into the lab, and then sat there for the rest of the game being worth a point or two.

I had sent a file with the cards and rules to my brother in Pennsylvania (I’m in Colorado) after the first night of inventing the game, and I sent him an update the following Monday morning to give him the improved cards with a theme and everything. Imagine my surprise when he said that he had already tried out the mechanics-only version of the game with his fiancee and another friend, and that they liked it! More awesome playtest feedback filled his email, and the game kept getting better.

Having people in other parts of the country playtesting my game would prove to be a constant, useful tool throughout the rest of Chaos & Alchemy’s development.

I’ll wrap up this installment of Making of the Game here, with another request for feedback: Is this stuff interesting to my readers? I know that I personally would have enjoyed reading about other peoples’ experiences with game creation when I was getting started, but I might be the only one!

P.S. For those of you who are interested in the game itself, I now have an Art Gallery page up on the main site!