I was out of town last week, so a substitute DM had the pleasure of running my table through an exciting encounter with Valan Jaelre and friends. The party was given the chance to take an extended rest after that fight (and somehow allowed to go shopping in an empty cave in the Underdark), ready for whatever I was going to throw at them this week.

My players immediately noticed that I had not brought my projector rig with me. “No battle this week?” Well, no map at least. I ran the game with my iPad for the adventure and a few honest-to-goodness physical dice.

After wandering deeper into the Underdark, the adventurers found themselves faced with a carved dragon/demon head on a wall, with a shimmering barrier inside its huge mouth. A message on the ground, magically changing to the language of whoever was reading it, said: “Enter and pass the tests in the name of the Queen of Spiders.”

Our intrepid (and now fully healing-surged) goblin slayer, Snarl, poked a finger into the shimmering barrier… and disappeared! He had been teleported away. Being bold adventurers, the rest of the party followed suit.

I ran the rest of the session by bouncing around the table, letting each PC tell me a bit of what they were going to do and then moving on to the next PC.

Snarl and our new drow ranger Drizzt (no relation) each found themselves in a chamber lined floor-to-ceiling with dusty ropes mounted in a spiderweb pattern. Three sharp spikes with dried blood on them stuck up from the ground, surrounded by bones of some tiny creatures. A channel ran along the tops of the walls near the ceiling with some movement visible within.

A message on one wall read, “Lure your prey onto the web, then impale them with your fangs. Three shall feed your ambition.” Snarl quickly decided to grab a spike, climb the ropes, and lure out a creature, which turned out to be a zombie rat. He speared the little thing, which made his spike start to glow. Wash, rinse and repeat, and the door opened, letting him out of the chamber.

The dice were kind to Zin, our drow wizard, who found himself in a room whose floor was covered with different colored tiles. The room was totally dark, but hey, drow have darkvision! Zin was easily able to walk the narrow path of dark colored tiles from one corner of the room to the other without slipping off, and the door opened for him.

Thoradin the dwarf fighter and Squintch the goblin scout each ended up in a room with a big statue of Lolth and an inscription on the wall that asked the adventurer to answer three questions about their motivation and talents. They both figured out that Lolth wanted to hear good lies rather than the truth, and they came up with some okay stories. The exception was Squintch saying that he didn’t know what his purpose was – Lolth found his lie to be sup-par and zapped him, and he then got on the right track.

This one held the most challenge for my party. A statue of a horrific demonic creature stood on one wall with hands outstretched. The statue’s hands could clearly hold items, and there were six different weapons around the room. There were also four gems in the walls that seemed to have magic tied to different damage types (lightning, cold, poison and fire).

Helios the genasi sorcerer took a trial-and-error approach and was rewarded for his many errors with lots of damage. After getting zapped three times by incorrect weapon / damage type placement, he found himself teleported away, tumbling down a chute into a cage. Fortunately for him, this cage was suspended above the room where his more successful companions had found themselves, and they were able to get him out.

After getting zapped once, our goblin hunter Snipe decided to rack his brain for memory of what this statue represented. He recognized it as a balor, which usually wields a lightning sword and a fiery whip. He armed the statue appropriately, touched the appropriate gems, and walked out of the room when the door opened. 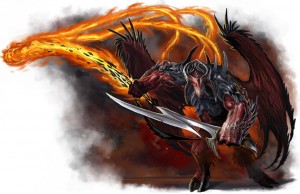 After patching up a few wounds, the group walked down a passageway deeper into the Underdark and soon found themselves hearing a female voice telling them to surrender. Combat seems imminent… but it will have to wait for the next session. Since next Wednesday is July 4 and the store will be closed, we’ll get together in two weeks’ time and run a double session.

This was the first time I had run a no-map session for Encounters, and it was fun. This was our shortest session by far – we were done in about 45 minutes, even with seven PCs. Still, it moved along briskly and the players seemed to have a good time. It will be nice to get back to kicking monster butt next time, though!