Deprecated: Return type of Requests_Utility_CaseInsensitiveDictionary::getIterator() should either be compatible with IteratorAggregate::getIterator(): Traversable, or the #[\ReturnTypeWillChange] attribute should be used to temporarily suppress the notice in /home/b2omeohdmp46/public_html/wp-includes/Requests/Utility/CaseInsensitiveDictionary.php on line 91
 Making the Game part 1 – Inspiration and first prototype | Online Dungeon Master
Skip to primary content

Welcome to my new blog series – Making the Game. In this series, I’ll talk all about the process I’ve gone through (and am still going through) of creating a game and ultimately producing and selling it. In this particular case, I’m talking about my upcoming card and dice game – Chaos & Alchemy.

It all started on May 31, 2012. I was driving home from work, listening to gaming podcasts (as I often do), and I happened to be listening to an old episode of Jennisodes. In this episode, Jenn had recorded a panel of game designers at a conference, and Fred Hicks mentioned something about a game possibly being based around an innovative dice mechanic (nothing specific – he was just saying that an innovative dice mechanic is something that can make a game interesting, and that he might have a file with nothing but dice mechanics).

I don’t know why, but this comment got me thinking. I originally was thinking about role-playing game dice mechanics here, and I thought of a mechanic where checks are resolved by rolling two six-sided dice, each trying to meet or beat a target number. If they’re both over the target number, you have total success. If they’re both under, it’s total failure. If one is over and one is under, it’s a partial success. I was thinking that a tie counted toward success at this point, but I wasn’t sure.

This seemed like it had some potential, but I soon decided that it wasn’t all that interesting for a role-playing game (although if anyone builds a role-playing game around this mechanic, I’d love to hear about it!). Something more like a board game, though, might work.

Yeah, this was going somewhere! When I got home from work, I mulled this over as I cooked dinner for my wife, then decided to start making up some cards. Since I use Excel all the time at work, I decided to make up a little card template in Excel. One cell would hold the card name, the next cell would tell what you do with the card after you play it, and the third cell would have the rules text for the card. I messed around with the spacing a little bit and ended up with twelve cards to a page – four cards in each of three rows. 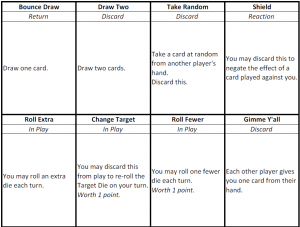 Actual examples of some of my initial playtest cards

Since this was a Thursday, which was my volleyball night at the time, I took a break for a while to go play volleyball. When I came back home, I finished putting together a few more cards (32 cards total), printed out 4 copies of each card, cut them up with my paper cutter and dropped them into sleeves with Magic cards (I just grabbed a few completed Magic decks from years ago that all had the same backs).

I talked my wife into trying the game out with me. We shuffled the giant deck of cards, drew two cards each, and started playing. At this point in time, the goal of the game was to get to 10 points, and each card in your hand counted for a point. The cards had names like “Draw Two”, “Take Random” and “Change Target”. There was no flavor at all – just mechanics.

And it was fun. Surprisingly fun!

I had just created a game from nothing, and it was actually fun for me and my wife to play. I decided it was worth continuing to develop it.

From that point, development on my game continued, and I plan to talk more about this in future blog posts.

I want to ask at this point: Is this interesting stuff for my readers? I’m still playing D&D and will continue to write about it, but a lot of my free time is going to Chaos & Alchemy right now, so I’d love to share it if you’re interested.