Since the launch of the public D&D Next playtest on May 24, I have been diligently trying out the game. I ran one session for my regular group of friends at home (home group), one session for a small group of players I know via play at the Friendly Local Game Store (FLGS group), and two sessions for my Friday night online group (once the prohibition against testing over the internet was dropped). All four sessions were with me as the DM, so I have not yet experienced D&D Next from the player’s side of the screen. I was using the Caves of Chaos adventure for all sessions.

Throughout the whole process, I’ve been keeping in mind that this is just the initial public playtest, not the final game, and I’ve encouraged my players to do the same. 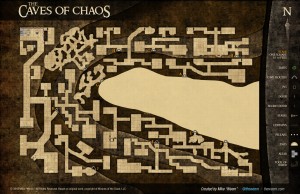 Caves of Chaos map by The Weem

Combat was quick, as promised. Whether online or in-person, combat was much faster than the 4e that we’re used to. It was nice not to have to track a bunch of fiddly bonuses and conditions – although this was only 1st level, and I don’t know how that stuff will be at, say, 8th level.

With the relatively light amount of plot and rules, I was forced to improvise a lot on the DM side of the screen, and I had a lot of fun doing so. I could probably achieve the same result if I just ran a low-prep 4e session, but I’ve never actually done that.

Players who lean toward older editions of D&D really liked the feel of the game. It looks like WotC is succeeding in making an edition that “feels like D&D” to a lot of folks.

Advantage/disadvantage is a fun mechanic on both sides of the screen.

Not being able to heal completely between fights made it feel like the players’ decisions mattered more. They liked that.

The Race/Class/Theme/Background setup of the characters made several players feel more connected to the characters from a role-playing perspective. Having a trade for the Commoner theme was great.

The Herbalism skill was popular – letting the cleric create potions and Healer’s Kits for half price.

Number of hit points felt about right for the PCs.

Coup de grace is satisfyingly vicious in the right circumstances.

The not so good

The characters were pretty limited in their options in combat. We’re hopeful that this might change with later modules.

Since hiding requires your action for the turn, players pretty much never wanted to do it, even the rogue.

Jumping across a 10-foot gap is pretty darn easy if you let characters extend their arms – even an 8 Strength character can clear it.

Having magical attacks like Radiant Lance going against AC felt weird. Simpler, though.

Tactically-minded players found combat to be kind of boring.

We miss opportunity attacks – and yes, I know this will be coming in a later module.

We miss spell cards. It’s a pain to have to refer to a separate book to figure out what the wizard’s spells do. 4e had this right.

The rogue needs more options for explicitly getting advantage. Hiding, as mentioned earlier, was not fun.

The fighter seemed pretty ridiculously powerful compared to the other characters in combat. That’s a lot of damage! And it wasn’t even interesting – the fighter swings his axe and either deals a crapton of damage or 3 damage on a miss. Rinse and repeat.

It would be nice to have all of the skills in one place, rather than the Rogue’s split between two different pages.

We need rules for swarms of monsters – fighting 34+ kobolds, sometimes with advantage or disadvantage, would have gotten really slow if I hadn’t been using a computer for the dice rolling.

I’m hoping that published adventures in Next will not all be so sandboxy. The free-form stuff can be fun, but it can also be fun to have some plot. I’d like to see what Next can do with a set-piece encounter as well.

The players who like 4e and Pathfinder weren’t very excited about this game in general. They didn’t see anything yet that makes them feel like switching (again, though, this is an early playtest).

Overall, I had some fun with this first round of playtesting. By the end of the fourth session, though, I was pretty much done with it. The online group had a final  battle when they found the Eye of Gruumsh piece and it basically possessed the rogue, who turned evil and super-powerful, leading to a player versus player battle that ended in lots of death. With the party pretty much wiped out, I was relieved to be done.

I’ll certainly keep testing D&D Next as new playtests come out, and I’m hopeful that it will end up being a game that I really enjoy a lot. There’s some good stuff here, but it’s not as fun as 4th Edition to me right now. In its final version, though, here’s hoping!

P.S. Thank you again to the Weem for the awesome Caves of Chaos maps. They were tremendously helpful!

2 thoughts on “D&D Next playtest results and opinions”