Welcome back to my blog series Making the Game, in which I talk about the process of creating my card and dice game, Chaos & Alchemy. In Part 2, I discussed my first real playtesting sessions and the process of adding a theme to a game that started as raw mechanics.

Tuesday, June 5, was an important turning point in the development of Chaos & Alchemy. This was the day that I took my playtest version of the game (slips of crappy-looking black and white paper stuck inside of sleeves with Magic cards) down to my friendly local game store, Enchanted Grounds, to see if I could get anyone to try it out. The game still didn’t have a name at this point.

I knew that the name would probably have something to do with alchemy, since that was the theme. During my Sunday evening playtest, my game designer friend pointed out that I needed a special word for what happens when you roll doubles in the game, since that’s an important thing – this is when you re-roll the Fortune Die. He suggested that I might want to just make up a nonsense word to call out, sort of like “Uno” in the game of the same name (and yes, I know that’s not a nonsense word!). I thought that if I could find a good word, I could use that as the name of the game, but I had a devil of a time coming up with anything.

I eventually settled on “Chaos” as the word for what happens when you roll doubles and the Fortune Die changes.

For the name of the game itself, I tried out Alchemy Chaos for a little while, but it felt clunky. Alchemical Chaos… same problem. Just before I left for the game store on that fateful Tuesday afternoon, I took a sheet of card stock and some markers and created a quickie sign that I could put on the table to attract attention: 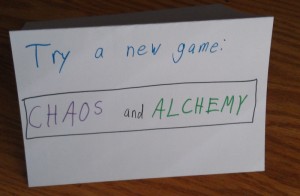 This was the first use of what became the game’s actual name, Chaos & Alchemy. I found an empty table at the FLGS and set this sign on it, along with the deck of cards and a bunch of dice. I also had my iPad with me to take notes.

I sat there for a while, trying to catch folks’ eyes, but most of the patrons were doing there own thing. One guy came in and was standing around watching his friends play a game, so I invited him to join me – no thanks. Sigh.

After a while, one of the guys who had been playing Magic came over and gestured to the sign to ask about the game. He thought the name sounded cool, and he wanted to learn more. So, he sat down and we started to play a two-player game.

A few minutes into the game, some of his Magic-playing friends who had finished their game started gathering around to watch and to ask questions. I invited one of them to take my place at the table so that I could take notes (okay, I mainly just wanted another person to play my game). The two of them had a blast and were already making suggestions about expansions and new ideas and asking when they could buy this game before they had even finished that first game.

When they were done, their other three friends, who had been watching most of the game, decided that they wanted to play, too, so the five of them sat down for a big game. This one took about 45 minutes, which is on the high end for game length that I’m shooting for, but not bad for five players. These guys were hungry and delayed their dinner plans so that they could play some Chaos & Alchemy.

All five of them gave me their email addresses so that I could keep them posted about the game and when it would be available.

At home that evening, I talked to my wife about the experience I had at the store. We were both feeling good about the game beforehand, but having strangers getting excited about it made a big difference. At some point she said the fateful words:

“You need to take this to GenCon.”

My first GenCon was last year (2011), and my wife came with me for that one. It was a ton of fun, but it looked like we weren’t going to be able to make it this year. Chaos & Alchemy was promising enough (after less than a week, mind you!) that my wife was sending me to Indianapolis.

I was already starting to poke around online to find out what it would cost to get art for my game if I decided to publish it, and this process now became serious. I also realized that I was going to need some legal advice, so I ended up getting in touch with Rob Bodine, who writes the Protection from Chaos column over on Loremaster.org (and yes, I see the irony of his column name when combined with the name of my game).

I would soon be a very busy dude.

P.S. The cover art for my new game has now come in from the talented Chris Rallis – take a look over at the Chaos & Alchemy web site. It’s pretty fantastic.