A few weeks ago I received a surprising offer: a person from a company called Banners on the Cheap (which also runs Signs on the Cheap and Magnets on the Cheap) wanted to give me a free banner in exchange for a review on my blog. This was surprising mainly because, let’s face it, Online Dungeon Master is pretty small potatoes as a blog! I’ve never had anyone offer me anything in exchange for exposure on my blog (aside from some obvious spammers).

The creative twist here is that Banners on the Cheap thought I might be interested in ordering vinyl banners for use as RPG maps. See, many dungeon masters / game masters use a vinyl wet-erase mat with a grid on it for their basic mapping needs, drawing buildings and trees and chasms and so on for each map, then erasing. These folks thought that DMs might be interested in printing their own custom vinyl maps with whatever images they like.

It’s a creative idea, you have to admit. Unfortunately, I’m the Online Dungeon Master – I use MapTool for my online games and a projector for in-person maps, rather than a physical map on the table. So close but so far!

Except… as you may have heard, I’m in the process of developing a new card and dice game called Chaos & Alchemy. The game doesn’t use maps or anything like that, but I do plan to be at GenCon and having a cool vinyl banner to advertise the game sounded like an awesome idea. I get a free banner in exchange for this write-up on my site? Works for me!

I decided to keep things fairly straightforward in designing my first advertising sign. I wasn’t quite sure how big the banner should be, so I went with 6 feet wide by 3 feet tall (figuring that this might hang nicely over the front of a game table). The Banners on the Cheap folks seem to be able to do whatever size you want, which is cool. 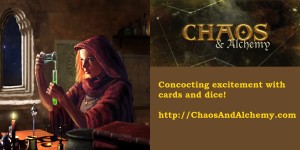 Since I was given a $40 store credit and the 3′ by 6′ banner only cost $23.56 (excluding shipping), I decided to add hemming and grommets to make it easier to hang in case I end up hanging it somewhere. That added $6.99 to the cost. Shipping of around $8 brought my total to $38.58; still below my store credit. Excellent!

I let my BannersOnTheCheap contact know that I had placed my order, since she had offered to expedite it for me (ooh, the benefits of being a big-shot blogger!), and less than a week later I had this in my hands: 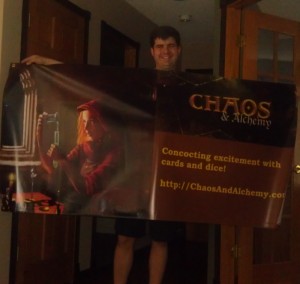 My apologies for looking kind of messy in the picture; I had just gotten home from playing tennis and was too excited to wait to open my banner. Cracking open the box revealed a bit of a “vinyly” odor, but nothing overpowering.

So how is it? I think it’s awesome! My art and logo look fantastic writ large, and the print quality is outstanding. The hemming and grommits feel very sturdy. The material itself is a bit reminiscent of the stuff duct tape is made of, but heavier – it has a web of some kind of reinforcing material running through the vinyl.

Since it’s a vinyl mat, just like a lot of the mats that most DMs use, it works great as a wet-erase mat (I tried this on the white reverse side of my banner). And just like those mats, this is not a dry-erase mat (dry-erase marker is permanent on it). The reverse side of the banner has more of the webbing texture, which may affect your ability to draw on it with wet-erase markers (you get a “bumpy” effect in your lines). The front side is plenty smooth, though.

So, what’s my verdict on Banners on the Cheap as an option for DMs/GMs? The quality is amazing, and the price is quite reasonable for what you get. I can see several situations where this kind of thing could make sense as a gaming map:

I’ve got to say that this seems like a pretty intriguing option for DMs out there. A 2′ by 3′ custom-printed vinyl banner from Banners on the Cheap costs $12.81, plus shipping (which is admittedly pricey at $7.17, but that covers shipping for multiple maps). Still, that’s a big, durable, wet-erase-writeable vinyl map delivered to your door for less than twenty bucks.

To compare apples to apples with Chessex, I’ll go with 2′ by 2′. That banner from BannersOnTheCheap would cost $9.38 plus shipping. Chessex lists the equivalent size Battlemat on their web site for $22.98 before shipping (which is $7 for orders under $100). Now, that Chessex mat is reversible and the Banners on the Cheap mat only kind of is (again, the “bumpiness” on the reverse is not ideal), but I personally only ever use one side of my Chessex mat. You can get the Chessex mat from Amazon for $21.49 (and free shipping if you’re on Amazon Prime). If you’re a one-sided map user, BannersOnTheCheap is still cheaper for a plain gridded mat, shipping and all! And that’s even before you consider the fact that you can, you know, print a full color map on the BannersOnTheCheap option.

Ultimately, I’m surprised at how attractive this option is to me. If I weren’t a projector-toting DM, I think I’d spend a few bucks on some “evergreen” maps and one or two plain gridded maps from BannersOnTheCheap. They’re quite durable, they’re wet-erase, they look fantastic when you print designs on them, and they’re darn affordable.

Who knew? I’m actually really glad that these folks approached me, even though I don’t personally need physical maps. I think a lot of DMs might get some serious use out of this. If you do, please tell me about it here!

6 thoughts on “Review: Banners on the Cheap for vinyl banners – and battlemaps!”