At long last, I have finished putting together my complete MapTool campaign file for the Madness at Gardmore Abbey adventure. Huzzah! You can download it right here. 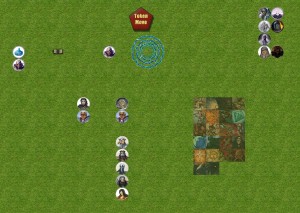 The campaign file consists of eight maps with encounters from the adventure, plus a ninth map that’s a holding pen for NPCs, the Deck tokens and some background stuff for the campaign (library token, templates). The maps are labeled according to the encounter numbers that are included on the map. For instance, the map named 01-04 Village has the encounter maps that take place in the outer part of Gardmore Village (Encounter 1: Main Gate; Encounter 3: Double Talk; Encounter 4: Ruined Garrison; plus the overland map of the abbey and the map of Winterhaven).

Because of the number of maps that are in this adventure, I’ve included Wolph42’s Bag of Tricks macros – specifically the Teleport Pads. To use these, you’ll need to click the “Back of Tricks Macros” button in the Campaign pane and then the Initialize Pads button. Once you’ve done that, you can drag tokens around the various maps by dragging them to the teleport pad corresponding to the map where you want them to go. The 01-04 Village map has the portals to every other map.

I hope that folks find this campaign file to be useful. I know that I’ve had a lot of fun with Madness at Gardmore Abbey so far, and I’m looking forward to running the rest of the adventure!