My RPG career has consisted mostly of Dungeons and Dragons Fourth Edition, a game I love. However, I’m always interested in discovering new and exciting things. Having heard great stuff about Fiasco on the Jennisodes podcast and elsewhere, I decided I should check the game out. I paid my twelve bucks for a PDF of the game just before leaving for my cruise vacation a couple of weeks ago and then read the game for the first time while aboard the ship.

Fiasco is a story game with no game master. The game begins with four six-sided dice for each player – two white and two black (although we used gold and purple in our game). All of the dice are rolled into a central pile, and then the players take turns choosing dice to let them pick from lists of Relationships, Objects, Locations and Needs for the characters that they’re creating on the fly. These lists come in Playsets, four of which come with the base game: Suburbia, Small Southern Town, Antarctica and Wild West.

At the end of this setup, each character will have some sort of relationship with the characters on either side of them, and each of those relationships will have a Detail associated with it (object, location or need). All the dice go back into the central pool, and the Scenes begin, with players taking turns.

When it’s your turn for a Scene, you can either Establish or Resolve. If you establish the scene, you describe what’s going on with your character in the scene and perhaps describe some conflict that the character will be working through in that scene. The players then role-play this scene at the table, bringing in the elements from the setup (relationships and details) as they go. At some point in the scene, the other players will decide whether the scene is going to end well for the main character, in which case they’ll give the player a white die from the central pile, or poorly, in which case they’ll give the player a black die. They’ll then play out the positive or negative outcome of the scene, and then the player will give their die to someone else (whoever they want).

If the player decides to Resolve the scene, then the other players decide what the scene will consist of, and the player in the spotlight will decide whether the outcome is positive or negative. They’ll take the appropriate die, play out the consequences, then give the die away.

After each character has had two Scenes, we get to the Tilt. Everyone rolls whatever dice they’ve collected so far (an average of two per player, but you could have anywhere from zero to six dice) and nets their white total against black. The highest net white total and the highest net black total will each get to pick an element from a Tilt Table: Crazy crap that will happen to the characters in the second half of the game.

The game then tells you to take a break and get a snack, talking about the game so far and where it’s headed. I like this rule!

You then move on to Act Two: two more scenes per character, working mostly the same as Act One. The differences are the Tilt elements, of course, but also the fact that the player who gets a black or white die based on their character’s outcome then keeps it instead of giving it away.

At the end of the game (two scenes per character in Act One, then the Tilt, then two more scenes per character in Act Two), each player again rolls their dice and nets white against black. The closer to zero your total, the worse the Aftermath for your character. You then take turns narrating what happens to your character after the movie is over, based on their Aftermath. A high white total or high black total will be a good ending for the character; low numbers are usually death or even a fate worse than death.

Seven people showed up for games over the weekend, and Fiasco is not designed for more than five. So, three people who weren’t that interested in role playing decided to play Lords of Waterdeep while four of us sat down for Fiasco.

After I explained how the game worked, we passed around the play sets and decided on Wild West. A note here: Definitely print out the play sets with two pages on each sheet of paper. It’s plenty big enough to read, and then you only have four pages (one each for Relationships, Objects, Locations and Needs) instead of eight pages cluttering up the table during the Setup. 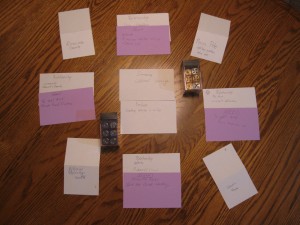 The ultimate layout for our Fiasco game. Tilts are in the middle of the table

My character’s relationships were Gamblers on one side and Criminal/Detective on the other, so it became clear that I was an outlaw. I decided to call him Pecos Pete.

The Detective to my left was Detective Stanton, a half-Chinese man from Chicago who was in Last Chance, Arizona – our made-up setting. Detective Stanton and Pecos Pete shared a Need to get away from an honest woman, ruined.

Stanton’s other relationship was Professional/Client, and we had established that Stanton was the professional detective. His client was the town sheriff, Sheriff McGinty, who had hired him to come to Last Chance to hunt down Pecos Pete. This relationship shared a location – the White Star Chinese Laundry.

Sherriff McGinty was a bit of a dirty cop, however, since his other relationship of Sheriff/Deputy was tied to a Need to get rich through fraud and trickery. He was working with his deputy to ultimately trick Detective Stanton into helping them defraud Pecos Pete out of his gambling winnings.

The deputy’s name was Roscoe, and he was trying to get rich along with the sheriff, but he was also a gambling associate of Pecos Pete. The two of us (I was Pete, remember) shared an object: A doctor’s black bag with and a jar of acid. Hm.

Act One saw the arrival of Detective Stanton in Last Chance and his first interactions with the gambling Pete and Roscoe, ending with him getting invited to a high-stakes after-hours game. We also saw the sheriff and his deputy, Roscoe, have a falling out after the sheriff learned that Roscoe was double-crossing and working with Pete to rob Stanton.

Stanton, meanwhile, ended up coming to the high-stakes game in disguise as Ling Wei, a Chinaman from the laundry who fancied himself a card player (but really had no skill). It was also established that the honest woman, ruined, that Pecos Pete and Detective Stanton shared a need to get away from was named Ruth. She had followed Pete from Chicago to Last Chance years before, and she had once been a lover of Detective Stanton’s.

Stanton closed out Act One with a jump ahead to a scene where he was standing over Ruth’s dead body in the laundry, hands bloodied. Deputy Roscoe came into the room, aiming to rob the detective, but instead stumbling upon the murder scene. Unfortunately for Roscoe, the Sheriff was also following Stanton, who managed to pin the crime on Roscoe. Poor Roscoe ended up in jail, awaiting trial for a murder he didn’t commit.

The Tilts introduced for Act Two were Innocence: Collateral Damage and Something Precious on Fire.

We began Act Two by establishing that Sheriff McGinty was going to try to get Pecos Pete to rob a government stagecoach for him, thus getting rich through fraud and trickery. Roscoe escaped from jail and switched Pete’s jar of acid with his sack of whiskey (I guess whiskey comes in sacks in Last Chance), without Pete’s knowledge. Stanton got stinking drunk after the murder of Ruth and decided to come and kill Pete, which failed miserably.

The sheriff hired some of his posse to act as snipers at the stagecoach robbery, killing Pete once he had taken out the driver and guard. Poor Roscoe came on the scene disguised as the sheriff – not knowing that the posse assassins were secretly associates of Pecos Pete and were planning to kill the sheriff on sight. Blam – dead deputy.

Pete managed to get onto the stagecoach and tried to use his acid to take out the driver, but since it was actually whiskey it ended up igniting thanks to a nearby lantern, engulfing the whole stagecoach in flames.

In the aftermath, things went badly for everyone. Pete ended up dead, having gotten only ashes of burned money for his trouble and then dying by acid when he tried to drown his sorrows in whiskey. Stanton ended up captured by Indians and tortured for years. The sheriff ended up dead, I believe self-inflicted, and Roscoe of course died in the final scene thanks to the double-crossing assassins and a poorly chosen disguise.

Fiasco is an interesting game, and great for people who really love role playing. I think I had expectations that were a little too high, though. Our group isn’t great at role playing, so we struggled a bit. We still had fun and came up with a rollicking tale, but we had our awkward moments.

The whole game took us less than two hours to play, which was good. We kept our scenes short, and even had a few scenes that didn’t really involve role playing, just narration. This worked out well.

I was surprised to learn that my friends strongly preferred wackier play sets. I was expecting that we would start with Suburbia or Small Southern Town, but Suburbia wasn’t even considered. They preferred the zany settings. This was fine with me, but I wasn’t expecting it.

Overall, I’d say that I’m glad I bought and played Fiasco. I don’t think it’s going to be a game that’s in heavy rotation at my tables, since my friends seem to prefer killing monsters and taking their stuff rather than getting deeply involved in role playing. That’s okay with me, too, but it’s fun to play a game like Fiasco every now and then. I’d definitely give it another go sometime.