There were no new blog posts for me last week because I was on vacation, taking a Caribbean cruise. My wife and I went with some friends of ours and had a lovely time, getting to spend time in Puerto Rico, Saint Maarten and Saint Thomas.

We also had several days at sea, so I naturally brought along some games to play. During one of the sea days on the way out to the islands I managed to persuade one of our friends to play San Juan with us, the card game version of the Puerto Rico board game. It was definitely in-theme for the cruise, and we had a nice time with the game.

On the way back from the islands, I mentioned D&D at lunch and was pleased when the woman in the couple we were traveling with asked about the game. She really knew nothing about it, but she knew that I really liked it and that my wife played, too, so I started describing D&D to her.

D&D is ultimately a cooperative storytelling game. Each player has a character that they get to play, and they have a sheet of paper with information about that character, explaining what the character can do. The dungeon master describes a situation that the players’ characters find themselves in, and then it’s up to the players to tell the DM what their characters do. If it’s something straightforward, like “I walk over that way,” then the DM just narrates the result. If it’s something that the character might or might not succeed in doing, like “I scramble up that tree,” then the DM might ask the player to roll some dice and determine the result of the action based on the result of the die roll.

D&D is a fantasy game, like the Lord of the Rings, and the players get to play the heroes. This means that they’ll probably find themselves in combat with bad guys from time to time, and the game has rules for taking turns in combat, attacking enemies, getting hit by enemies, and yes, even death.

Given that description, my friends were interested in learning to play. Fortunately, I had come prepared!

Usually I run D&D games using my laptop and a projector. While I did have my laptop with me on the cruise, there was no way I was bringing my projector rig. Instead, I had grabbed the Dungeon Master’s Book from the Essentials Red Box set, along with the poster map and the sheet of tokens that came inside the Red Box. I also brought the pre-generated characters from D&D Encounters, which I had from last summer, and a container of dice.

The Red Box adventure, The Twisting Halls, assumes that the players start off by going through the solo adventure in the player’s book, creating their characters that way. I wanted to get the new players into the action as fast as possible, so I just gave them pre-gens and a little back story.

The adventure began with the party having been hired by a merchant to go to some goblin caves to recover a box that had been stolen from the merchant. The merchant also mentioned that he had seen a scary dark rider and thought that the rider might be involved. That was it for story; off we went into the first combat with two goblins and a wolf (scaled down from two wolves since we only had three PCs). 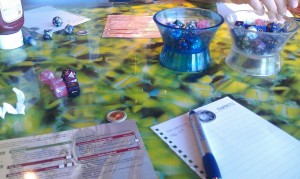 Our first combat went smoothly enough, with the new players getting a feel for what their characters could do. They won the fight without much trouble and then sent their drow ranger down into a passageway to scout ahead. She was very stealthy and saw a couple of goblins standing in a room, not noticing her.

She asked, “Can I shoot this one?” Well sure! Surprise round, go for it. And thus began the second combat, with the rest of the party still at the top of the tunnel.

This combat was intentionally harder. I ran the full combat for four PCs, but I did it in waves. In the first few rounds, the players noticed someone peeking out from behind a door that was ajar, and the door later closed. Then, as combat with the goblins and their guard drake was almost over, a goblin spellcaster came out from behind a closed door and started blasting the party with magic.

My wife’s character, the cleric, spent some time making death saving throws, one of which fortunately ended up on a 20. From there, the party was able to handle the fight with no problem.

At this point the party discovered a little treasure, and I decided to call it a day. I could tell that our friends were starting to get a little tired, and I didn’t want to overwhelm them.

I was a little disappointed that I had picked an adventure without much real exploration or role playing at the beginning; we basically just had two fights and that was it. I’d like to give new players more of a sense of adventure, so that was a mistake on my part. But still, I was glad that my friends were intrigued enough to give them game a shot. We’ll be visiting these friends in Minnesota in a few weeks, and I’ll bring my D&D stuff along, just in case!