Big news for me from last week: My first game, Chaos & Alchemy, is now on Kickstarter from my publisher, Game Salute!

I know it’s odd that it took me five days from the go-live date to finally post this on my blog, but man, it’s been a busy five days! I still have people who tried Chaos & Alchemy at Denver Comic Con and who gave me their email addresses to be notified of the Kickstarter whom I haven’t emailed yet. I’ll get there, though.

Anyway, as you can see from the widget, the campaign is doing really well. We hit the $5,000 funding goal in under 15 hours, and we were 200% funded by the first weekend. Stretch goals are starting to be achieved!

I really hope we hit a bunch of stretch goals, because there are some seriously awesome things that I want to see happen in this campaign. Game Salute isn’t publishing all of them yet, but I know what they are, and I know that one of them in particular is really exciting.

So, if you’ve been following my blog and reading about the whole creation process and initial DIY publication of Chaos & Alchemy from last year, you can now get in on the complete, color illustrated edition. It’s just so pretty! 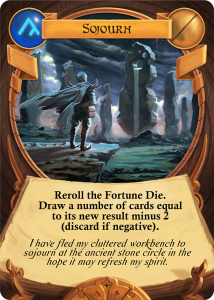 Sojourn from Chaos & Alchemy. Illustration by Enggar Adirasa. Graphic design by Dann May.

Thank you to those of you who have been following me all this way, and especially to those of you who are supporting me on this Kickstarter. It’s so exciting to know that my game is actually going to be in stores soon, thanks to your help. You guys rock!

P.S. If any of you are interested in taking a gander at my simple co-op (or solo) mountain climbing game, tentatively called Everest, please drop me a line at claycrucible@gmail.com.