Earlier this week, I wrote about the problem of a game being too balanced. To recap, you don’t want a situation where a game is completely unbalanced and players have unequal chances of winning or a player will win by luckily getting the most overpowered card or something like that. But if you balance everything to the point that every choice a player can make is about as good as every other choice, then the choices become meaningless and the game becomes boring.

Alchemy Bazaar is a “worker movement” game. The object is to have the most Wisdom at the end of the game, which you get by completing Formulas (represented by cards). Each Formula has a cost to complete it; typically some combination of the three alchemical ingredients in the game: Gems, Metals and Spirits. 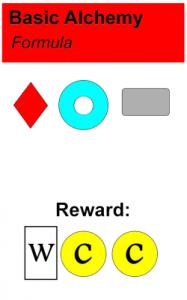 Basic Alchemy formula. Cost: One Gem, one Metal and one Spirit. Reward: One Wisdom and two Coins.

To collect these Formulas and Ingredients, players will send their Apprentices (workers, represented by meeples) around the bazaar, which is made up of Shop tiles. The game begins with five basic Shop tiles, and more tiles are added each turn as new merchants set up shop. 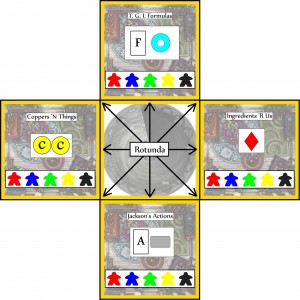 Each Apprentice can move to an adjacent Shop for free and use it, and then may pay 1 Coin to move again, then 2 Coins to move again, and so on until the player decides to have that Apprentice stop. Whatever Shop the Apprentice ends in is occupied so that no other Apprentice may use it (as in a typical worker placement game), but any Apprentice who enters a Shop and finds it already occupied may move through it for free.

The fundamental “over-balancing” problem I had with my earlier version of Alchemy Bazaar was that all three Ingredients (Gems, Metals and Spirits) were of equal value. They had an equal probability of showing up as resources in Shops and and equal probability of being needed to complete Formulas. So, basically, players would just try to gather as many Ingredients as they could without caring too much about which Ingredients they picked from which Shops.

Sure, if you have a Formula that requires a bunch of Metals you’ll be more likely to go after those, but your next Formula is just as likely to have any other Ingredient.

I also had a very even power level in the Shops and Formulas themselves. For instance, there were several cycles of Shops that were paralleled through all three Ingredients:

A cycle of balanced Shops; each one gives two of a particular Ingredient.

Similarly, with Formulas there were multiple parallel cycles 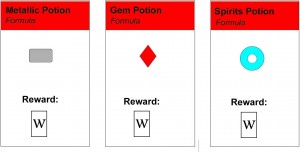 Cycle of Balanced Formulas – one Ingredient for one Wisdom card

The main part of the solution was to make Gems the most valuable, Metals middle of the road, and Spirits the least valuable. This required changing about half of the Shops and half of the Formulas. The Action cards (which I haven’t discussed in this post) remained mostly unchanged, interestingly. I also changed the “random Ingredient” die from one that gave an equal chance of each Ingredient to one with one Gem, two Metals and three Spirits on it. (This die is rolled on many Shops and as Formula rewards.)

Now there were still cycles of Shops and Formulas, but they work differently for each Ingredient.

A cycle of unbalanced Shops. A player can get three Spirits, two Metals, or one Gem plus a random Ingredient.

I reduced the number of places where players could get an Ingredient of their choice (since they’re more likely to just pick the valuable Gems) and increased the opportunity to roll the die (since it’s a more interesting roll now).

I’m also okay with having some Formula cards that are better than others; the same is true of Shops. For instance, there is a cycle of Formulas that cost 1 Coin plus 1 of either Gem/Metal/Spirit plus 1 Ingredient of your choice; all three of these Formulas have the same reward (2 Wisdom). The Spirit version is easier to accomplish than the Gem version, but I didn’t change the reward (intentionally) to reflect this. If you get the Spirit card, you’re a bit luckier than if you get the Gem card. But since you’re likely to complete a dozen or more Formulas during a game, this is okay.

So far I’ve just had one playtest (two players, myself and my wife), but the difference was clear; the less-balanced game is far more fun. Decisions are more interesting and they feel like they matter.

On an unrelated note, I’ve also decided to shorten the game slightly. Before, a two- or three-player game would last six rounds; I’ve shortened that to five (which took just under an hour for my wife and I, with distractions). A four-player game has gone from five rounds down to four. And I’ve decided that the game just isn’t suited for five players at all, rather than taking the five-player game from four rounds down to three. This could change later, but that’s my current plan.

Further playtesting will be needed, of course, but I’m pretty sure I’m on the right track here. Let’s hope I get Alchemy Bazaar as polished as it can be before I pitch it to publishers at Gen Con next month!

P.S. Game Salute is just about ready to launch the Kickstarter campaign for my first game, Chaos & Alchemy. It’s coming any day now, so keep an eye out for it!