Deprecated: Return type of Requests_Utility_CaseInsensitiveDictionary::getIterator() should either be compatible with IteratorAggregate::getIterator(): Traversable, or the #[\ReturnTypeWillChange] attribute should be used to temporarily suppress the notice in /home/b2omeohdmp46/public_html/wp-includes/Requests/Utility/CaseInsensitiveDictionary.php on line 91
 Simplify, Simplify – Streamlining game design | Online Dungeon Master
Skip to primary content

I’m still a relatively new game designer, so I’m learning all the time. One of the best lessons I’ve learned so far about good game design can be summed up by the famous quote from Henry David Thoreau: “Simplify, simplify.” Thoreau was talking about life in general, but I’m talking about game design. My design process tends to have me start with an idea, ponder it in the back of my mind for a while (Chaos & Alchemy had very little pondering, but my other games have had more), put a prototype together, and start playtesting. My first playtests should be solo, followed by a game with my wife (though I admit that I’ve typically subjected my wife to my embryonic game ideas more often than not). After some initial revisions, I’ve historically played with a core group of friends, including my good friend Nate.

Nate is a professional game designer. He has worked on some very well known tabletop games in the past, and he currently works on electronic games. I’m very sad that he and his wife recently left Colorado, where I live, because Nate has a terrific skill for a designer like me: He can see what needs to be cut out of a game.

I’ve almost invariably found that my games start off too complicated. Too many moving pieces, too many decisions, too many things to remember for the players. I want to make games that are easy to learn and intuitive to play, which means that I have to simplify.

Those of you who have played Chaos & Alchemy know the basic turn mechanic: You conduct an Experiment by rolling three six-sided dice. Each die that matches or beats the shared Fortune Die counts as a Success and each die that’s lower than the Fortune Die counts as a Failure. You also get one Free Success per turn. Each Success lets you either draw a card or play a card, and each Failure forces you to discard a card. 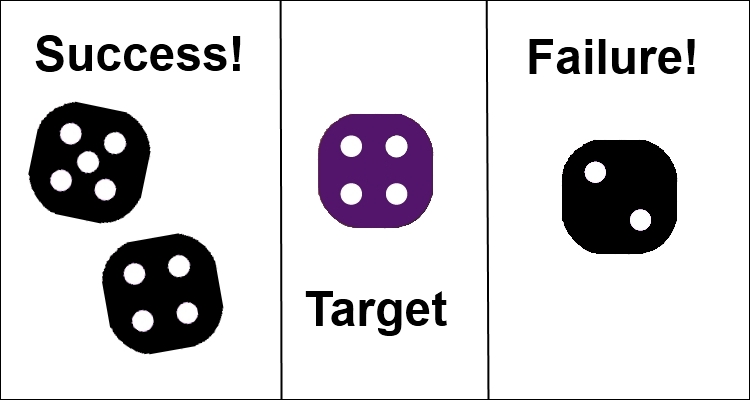 In the earliest prototype of the game, players were only rolling two dice. They also were allowed to draw one card for free and play one card for free each turn, in whatever order they wished. This allowed for a lot of flexibility, but it was hard to keep track of.

Nate’s suggestion was to eliminate the Roll card, since it was usually easy to remember if you had rolled yet. Simple enough.

He then suggested getting rid of the Play card and adding a third die to the Experiment. There was still a free Draw, but we were down to one tracker.

Naturally, Nate then suggested eliminating that card as well… and I tried it. Ultimately, though, the most fun solution was to have the Free Success that I ended up using. It’s only one thing to track, and it uses another die, so it works just like other Successes. Also, as a fun side benefit, you get doubles (Chaos in the game) a lot more often with three dice than you do with two (4 out of every 9 rolls instead of 1 out of every 6), and rolling Chaos is cool.

I know that I haven’t blogged in detail about Alchemy Bazaar very much, but it’s in active playtesting now and going very well. I’m excited about this one!

The basic idea is that players add shop tiles to an ever-growing bazaar of alchemical goods and formulas, then send their apprentices through the shops to get the things they need to conduct alchemical experiments. It was heavily inspired by Lords of Waterdeep (one of my favorite games). 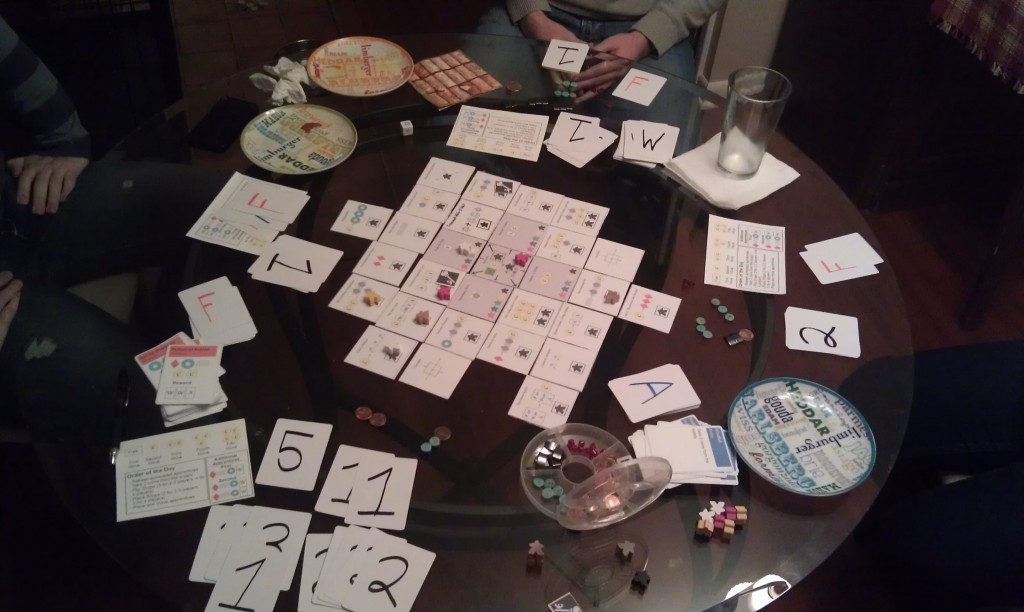 Playtest game by my brother Danny, at the end of the game

In the initial version, whenever a player added a tile to the bazaar, they would put a small token on the tile to show that they owned it. Whenever another player’s apprentice would later use that tile, the owner would get a benefit.

It was fun, and it made sense to anyone who has played Lords of Waterdeep (its building tiles work the same way). After the first play-through with Nate, his only suggestion was to eliminate tile ownership.

Now, this required that I revamp the economy of the game somewhat, but Nate helped me see that the core fun of the game came from moving the apprentices around the bazaar. Shop ownership worked, but it was a bit of a distraction.

And you know what? Removing it hasn’t hurt the fun of the game one bit.

Another inspiration for Alchemy Bazaar was originally Alhambra, which has specific rules about the way the walls on the tiles can be played. Alchemy Bazaar’s shop tiles originally had walls, too, which created various passageways through the bazaar. It was kind of interesting, and it allowed for cards that would let players pass through walls or rotate tiles and such.

My first blind playtester for this game, as with Chaos & Alchemy, was my brother Danny, who lives in Pennsylvania. He was a real trouper, creating his own print and play version of the game, and most of his confusion came about with the rules for walls. Clearly, I needed to write the rulebook better.

Later, I took the game to Genghis Con, a local gaming convention here in Colorado, and ran seven games over the course of a couple of days. Feedback was fantastic, and I usually asked players what they thought about the walls. I was noticing that these games usually ended up with the walls not really coming into play very much.

I received two suggestions. One was to add more walls. If there aren’t enough walls to matter, then make more of them! This could work, and would make those tile manipulation cards more interesting, too.

The other suggestion: Do away with walls.

I decided to try the latter suggestion. And you know what? I don’t miss the walls one bit.

Yes, I had to get rid of the cards that only matter when walls exist, but that wasn’t a great loss. And now the game is much easier to teach; the wall rules took up more time in the explanation of rules than they were worth.

A game about moving around a bazaar could be very interesting with walls as a major component. But as it turns out, Alchemy Bazaar just doesn’t need them.

Now, there are certainly cases where an overly-simple design needs an extra mechanic or something to make it interesting. But it’s my belief that more often than not, what makes a good game design into a great one is the ability to simplify the game to the core of what makes it fun. With Nate no longer here in Colorado, I guess I’ll have to take that lesson to heart myself!