Welcome back to my blog series Making the Game, in which I talk about the process of creating my card and dice game, Chaos & Alchemy. This is an addendum to my previous post about manufacturing the game by guest blogger Jamey Stegmaier, the creator of a game called Viticulture that is currently on Kickstarter. Here’s Jamey. 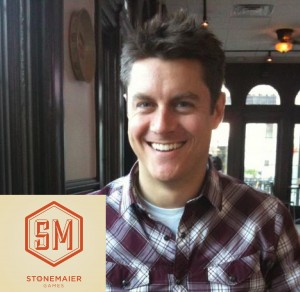 Viticulture has a number of components, including:

Unlike Chaos & Alchemy, I’m obtaining all of these components from the same source: Panda Games Manufacturing. Michael was doing a print-run of 125 games, and it’s great that he was able to piece everything together from manufacturers here in the U.S. It definitely saves on freight shipping.

But I wanted a manufacturer who could handle the whole process and keep costs low. I did not have success finding a manufacturer in the U.S. who meets those requirements, so I turned to a company that several other Kickstarter game creators had recommended to me.

Their recommendations could not have been more accurate. Panda is a pleasure to work with—specifically, Chris Matthew (chris@pandagm.com), who actually works out of Panda’s corporate office in Vancouver. Chris is highly communicative and is great at identifying little issues that you might overlook (like when your player mats are bigger than the box…oops). I wouldn’t recommend reaching out to him unless you know exactly what your components will be.

The other factor you have to weigh when you consider Panda Games is that you have to pay for freight shipping across the Pacific. That will run you between $4k (half a shipping container) and $6k (a full container). They’ll ship door to door, which means that they can take care of customs and tariffs and all that (you’ll pay for it, but they’ll oversee the process). But you also need to have a destination for all those games (I’m still learning about what happens next if you use a storage and fulfillment center, so perhaps I’ll have to follow up with another post in the future). 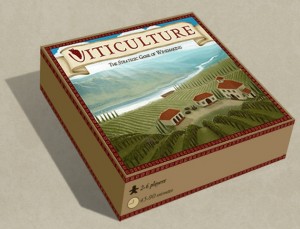 The high freight shipping cost means that you want to ship as many games as possible. The minimum order through Panda is 1500 copies of the game, hence the necessity for Kickstarter unless you have $20k sitting around collecting dust (and if that’s the case, you really should at least put that cash in a bank). If your game has similar components to mine, you can expect to save about a dollar if you increase your print run from 1500 to 2000, and then another dollar if you increase that to 3000 (which will fill a shipping container). Thus 3000 is kind of the sweet spot to maximize your per-unit price and your shipping costs.

Viticulture box art by Beth Sobel – one of the Chaos & Alchemy artists!

You’re probably wondering about manufacturing time. From the minute you send your final files to Panda, there will be a bare minimum of 4 months before you receive your games, and that’s if everything goes perfectly. 3 months at Panda for manufacturing, 1 month for shipping. And that doesn’t include packing and shipping the individual recipients. I budgeted 6 months for Viticulture, but I hope to be faster than that.

On Kickstarter, it’s common to offer different versions of the same game so people have a choice. For example, I offer the Viticulture base game for $39 and the game + expansion for $49. Panda can custom package your games based on those reward levels.

I have a few notes about some of the components.

You’ll want to keep a few numbers in mind if you have cards in your game so that you can maximize each sheet of cards, as it costs a fair amount to set a single sheet. Depending on the size of the cards you’re using, different numbers of cards can fit on a single sheet:

I decided to go with the mini cards for Viticulture—they’re the same size as the cards in Settlers of Catan. They’re not big enough for a lot of text, but my cards don’t have much text.

Panda can make pretty much any type of token if you send them an outline to use. You’ll have to pay extra for custom tokens, and even more with custom tokens with concavities, but anything else is fair game.

You’ve probably seen these in games: thick cardboard with corrugated coins to be poked out before you can play. The key with these is to include everything on a single punchboard and then have Panda include multiple copies per game if necessary. For example, in Viticulture, there are 108 coins. I can fit 36 per sheet, so I’m putting all of the various types of coins on one sheet (opposed to all silver coins on one sheet and all gold coins on the next). That way Panda only has to set one sheet of tokens.

I wish I had known more about metal tokens before I started my campaign. Now I know better. I think these are a really cool addition to any game. They’ll cost you a bit, but it’s not extravagant, and at the very least you could offer them as a stretch goal on Kickstarter. 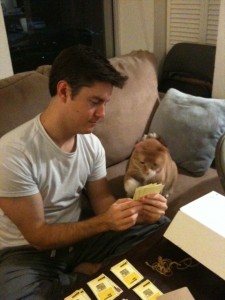 I think that’s pretty much it. I’m sure I’ll have more to share after this process is over—I’ve only really just begun. But I’ll share more in the future. In the meantime, if you want to stay in touch with Stonemaier Games, feel free to subscribe to our blog or Like us on Facebook. Or back Viticulture on Kickstarter to get updates throughout the manufacturing process—I intend to share the inside scoop with everyone there. Thanks!

This is Michael jumping back in here to say that I’m a backer of Viticulture; it’s definitely my kind of game. I highly recommend checking it out!