Our group gathered in mid February for our third session in the Zeitgeist campaign from EN World. This session took us to the climactic finish of Adventure One: The Island at the Axis of the World.

Since my group had ended session two by going a little bit off the rails, I had to create a new encounter to kick off session three. The group was racing along a sea wall surrounding a fortress, trying to follow the trail of some fiery, smoky being that had destroyed a ship in the harbor before leaping onto the wall and into the fort. Unfortunately for our heroes, the wall was being viciously fought over by the defenders upon it and the attackers bombarding it from ships in the harbor. 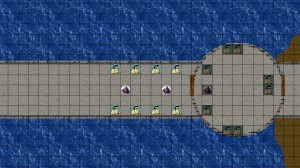 The battle is fairly simple. The party is approaching along the wall from the left side of the map. Four Rebel Musketeers (custom enemies) are on the north side of the wall, shooting at ships in the harbor, and four more are on the south side of the wall, doing the same thing. Half of each set of musketeers have their muskets loaded and ready at any given time. Two Rebel Soldiers (from the published adventure) are between the rows of musketeers, giving orders.

At the end of each round, a cannonball comes flying across a random row of the wall around the tower, attacking creatures in that row and on either side of that row. This can cause characters (both PCs and enemies) to be pushed off the wall and into the water.

Once the PCs get within ten squares or attack the enemies, the rebels notice them and turn their focus from the ships to the PCs.

The full encounter is available here (Beware the Cannonballs), and battle maps scaled to a 50 pixel per square grid are below. 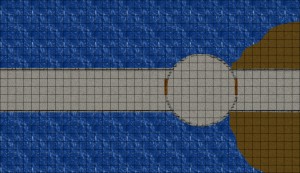 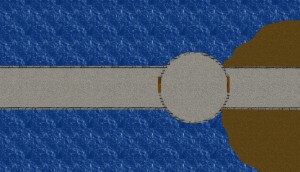 Where did he go?

Once the party had conquered the sea wall tower, they moved along the inner wall until they met up with allied soldiers who had succeeded in breaching the wall. The fiery creature they were pursuing was nowhere to be seen, but the commanding officers requested the party’s assistance in dealing with some Danoran prisoners in a brig.

Negotiations with the prisoners went well and led to some intelligence about an entrance to the central tower of the keep through the sewers. The Danorans also gave the party a key that would open a door on the roof of the tower in case they ended up there. These discussions were ultimately interrupted by screams and the sound of running feet across the roof of the brig – the fiery creature was back!

Our heroes rushed into the streets to see the fiery creature, revealed as an eladrin, using a strange orb that caused the inner fortress wall to disappear, replaced by wilderness for a few moments. The fiery eladrin ran across the tops of the hedge maze within the inner fortress wall and then started scaling the central tower. The PCs decided to rush after him.

Vesper, the scout in the party, had found the token back in the mines that gave him tremendous jumping power, so he decided to use that power to go bounding after the eladrin. He hopped along the tops of the hedges in the maze and found himself at the base of the tower, staring up as the eladrin finished ripping out bricks, tearing what looked like a gold wire in the wall (gold circles prevent teleportation in this world) and then disappearing – presumably inside the tower. Vesper climbed to the roof, used the key on the roof door, and started sneaking downstairs.

Meanwhile, the rest of the party found themselves dealing with an irate fey creature named Ghillie Dhu who was blaming them for lighting his hedges on fire (when in fact it was the eladrin who had done so with his fiery aura). Some quick negotiations followed, including a bit of a seduction by the female eladrin in the party, Andraste, and Ghillie Dhu was satisfied that the party was chasing the eladrin who burned the maze, not allied with him. Ghillie Dhu led them through the maze to the base of the tower, where they found a rope had been lowered by Vesper.

Inside the tower, Vesper had gotten himself into a good eavesdropping position. He was able to see the eladrin, badly bloodied after fighting a bunch of guards in the tower, having a heated exchange with Duchess Evelyn of Shale (the Risuri noblewoman who had invaded the island) and a tiefling named Nathan Jierre. The eladrin, referred to by the duchess as Asrabey, had clearly beaten the duchess and the tiefling, and the duchess was trying to reason with him. Vesper bided his time, readying an attack in case Asrabey tried to hurt the duchess or the teifling any more.

The rest of the party was working on climbing the rope. Some of the PCs made their Athletics checks quickly, but our poor docker bard, Corduroy, struggled and struggled. As the party made it onto the roof, they saw the open door and peaked in, communicating through hand gestures with Vesper below.

Once Corduroy finally made it to the roof, he danced a jig of happiness…

Which made some noise, attracting the attention of Asrabey, who finally looked up and saw Vesper above him. His rage set off Vesper’s readied action, and we were in combat!

This was a beautiful moment in the adventure, where the writer, Ryan Nock, provides the DM with two ways to run the encounter. The default approach is to run Asrabey as an injured level 20 creature with only 27 hit points. This makes him practically impossible to hit, unless a PC rolls a natural 20, uses a power that deals damage without an attack roll (like Magic Missile) or uses a power that still has an effect on a miss (like most daily powers). At the same time, his attacks always hit the PCs unless he rolls a 1.

Alternatively, the battle can be run with Asrabey as a level 2 solo creature. I went hard core – he was level 20.

Combat was quick and deadly. Asrabey set his shield to work chewing on Vesper as the rest of the party rushed inside. The eladrin set up a zone that would soon erupt into flames. Andraste the witch used a power that would deal damage to Asrabey every time he hurt one of Andraste’s allies.

The party started to worry that they had bitten off more than they could chew, but they were doing their best to make use of daily powers and creative effects. Asrabey took a few hits and was clearly teetering, but Vesper was unconscious and laying in the area that would soon erupt into flames.

Asrabey began his turn, the flames rose, and Vesper was burned to death…

At which point Andraste’s effect caused Asrabey to take a few points of damage, killing the eladrin.

My players, including Vesper’s player, literally jumped to their feet, cheering and high fiving one another. It was one of the best moments I’ve had as a DM. Even though a PC died, it was a huge victory that was hard-won. They earned it, 100%.

In the aftermath of the battle, the party managed to steal Asrabey’s sword and cloak – high-level items that they really shouldn’t have and that are quite illegal for them to have taken in-game. But that’s okay… I don’t mind there being consequences later!

Thus ends adventure one of ZEITGEIST. It’s a very cool campaign so far, and I’m hoping to start adventure two as soon as we can get everyone’s schedules to line up. I’ve just learned that two of my six players are moving away in August, and there’s a chance that two more might be going eventually as well, so I hope to make some progress on the campaign while we still can.