Session two came later in Christmas week, two weeks later in-game. The PCs were invited into their boss’s office, where they met the foreign minister from Risur’s historic rival, Danor (the tiefling country). Things started getting hard to follow politically, but in a nutshell the Duchess had disappeared off the Coaltongue during the chaos of Session One and had resurfaced a week later leading a force of Risuri rebels to take over Axis Island, an island held by Danor. Ultimately her goal seemed to be to start a war between Risur and Danor, and the Danoran foreign minister wanted to head that off. So, the PCs were tasked with being the “B team” of RHC agents, traveling with an “A team” from out of town. They were going to help stop the Duchess.

The interaction with the Danoran foreign minister was a little odd; there was a puzzle for the PCs to solve that, in retrospect, seems pointless (though I think I ran it poorly). That’s a minor quibble.

Meet the A Team

Anyway, the “A team” was presented in the adventure with brief bios, talking about character quirks of Seven Foot Dan and the illusionist who leaves an image of himself in boring meetings while he leaves to get a snack, that sort of thing. The party gets to interact with this other team as they sail toward Axis Island. Naturally, being genre savvy, my players immediately assumed that their companions were doomed and the PCs would soon be in charge.

The mission involved swimming through an underground tunnel on Axis Island, climbing through a mine, traveling overland to a fort, using a Passwall scroll to get inside, getting to a lighthouse, opening a sea gate to the fort’s harbor, and then using a Pyrotechnics scroll to signal the Risuri fleet to sail in and take the island. Naturally, the A team was mostly killed in step one, swimming through the tunnel, and the PCs had to take over. 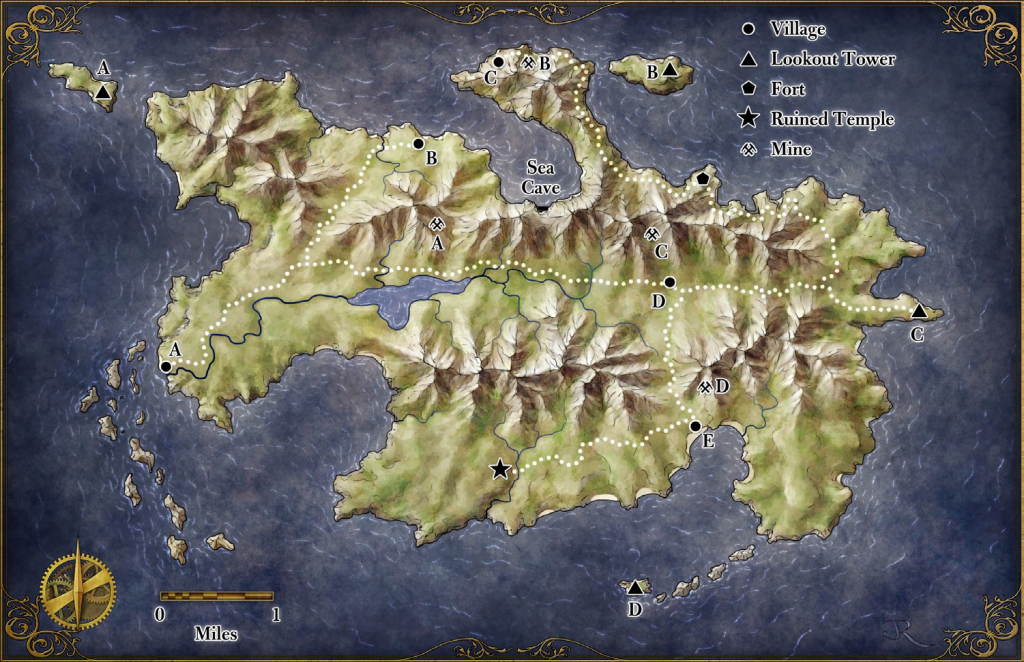 The mine was inhabited by a paranoid Danoran whom the PCs were able to eventually convince to stop shooting them. They acquired a magical coin in this mine that allowed their scout character (who fancied himself as being Batman) to have a jump speed equal to his walk speed while on the island. This will become important later, especially in Session Three.

Traveling overland was another skill challenge, but handled as individual scenes – definitely my preferred style of skill challenge. The most noteworthy of these was when the party spots a gigantic headless iron golem lumbering through the woods and hides from it.

Once the Constables arrived at the outer wall of the fort, getting through it with Passwall was a piece of cake. The Batman PC then climbed onto a roof and jumped from building to building, helping the folks on the ground avoid the Duchess’s patrols. Eventually they made it to the lighthouse out on the sea wall that contained the controls for the sea gate.

This triggered only the second full-on combat of the adventure so far, which took place near the end of the second session. (Zeitgeist is not ideal for players who just want to kill things and take their stuff, in case that wasn’t clear.) The lighthouse was defended by rebel soldiers, including a wizard with a pet drake. I appreciated that the combat had some good 3-D elements, with the PCs starting on a wall about 25 feet above the water. There was a ship docked beneath the wall, with ramps leading to the top. The lighthouse was obviously a vertical feature, with stairs leading up to a porch and then the tower itself having multiple stories. There were lots of opportunities to push people off ledges and so on.

Once the lighthouse was secure, the Constables found the controls to open the sea wall and they signaled the fleet to come on in. They stayed put while a land/sea battle broke out. Eventually one of the higher-ranking naval officers, Captain Rutger Smith of the RNS Impossible, came to chat with them. I only mention Captain Smith because he’s referred to once in the adventure as Captain Impossible; I have no idea if that was just a typo or what, but I love that name! “Captain Impossible; hero of the galaxy!”

Captain Smith handed out cigars but said not to smoke them until the whole mission was accomplished: Securing the fort and taking the Duchess into custody. She was holed up in a tower in an inner fort. Anyway, the PCs were given a detachment of soldiers to help them out, which I ended up referring to as their “little buddies”. These were basically minions who tagged along with the PCs and would follow orders. They could shoot a gun once per encounter, auto-hitting. I asked the PCs to name their pals, which gave us Pop Tart, Princess Sophia, Robin (Batman’s buddy, of course), Watson (another PC styles himself as being like Sherlock Holmes) and Food on Legs (companion of our vampire). Good times.

What the heck was that thing?

As the party was relaxing in the lighthouse, waiting for the military to finish doing their thing, they spotted a commotion on a Risuri ship across the harbor. The ship burst into flames, and they spotted a figure jumping from the ship to the sea wall and running along the wall before becoming impossible to see in a cloud of smoke. What to do? Go after it!

Of course, this required navigating the sea wall to get back to land, but the sea wall was being defended by the rebels and bombarded by the Risuri navy. This particular course of action was not spelled out in the printed adventure, so it was time to improvise a fight. And that’s where we decided to end Session Two.

This session didn’t “pop” as much as the big bang fight on the ship of Session One, but it was still fun. I enjoyed role playing Seven Foot Dan and the gang for sure!