A few months ago, one of my closest friends gave me a copy of a book for my birthday: Characteristics of Games by Skaff Elias, Richard Garfield and Robert Gutschera.

The quick review: I absolutely love this book. If you have friends who are interested in game design, this would make an excellent gift for them. 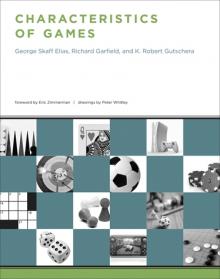 I like their approach to definitions; they intentionally avoid saying “X counts as a game, but Y does not.” Instead, anything that people often refer to a game is treated as a game, and sometimes things that people don’t really refer to as a game (such as crossword puzzles) are also treated as games. This makes for a wide-ranging book.

One thing that annoyed me was that the authors made the understanding of the computer game Starcraft very important to understanding many of their examples. I know that it’s a well-known game and that it has a huge following in South Korea, for instance, but having never played the game myself I found myself frustrated more than once at how often Starcraft came up. Ultimately, it’s really about the real-time strategy (RTS) genre in general, with Starcraft as the specific example used, but that’s not a genre I’ve played. Oh well; my fault for not being “well-played” enough!

As I said, I really love this book. It aims to be useful as a textbook for a game design class; I would be happy to teach from it. As a developing game designer, I learned a ton from reading Characteristics of Games, and it’s a book I plan to keep recommending and to keep re-reading from time to time as well. Kudos to Skaff, Richard and Robert!