A few months ago, my brother pointed out an amazing web site where you can play Dominion online for free. It’s at http://dominion.isotropic.org. If you’ve never been there, I highly recommend checking it out.

For those who haven’t played it, Dominion is a deck-building game by Donald X. Vaccarino that was first released in 2008 and that won the 2009 Spiel des Jahres (the German Game of the Year prize – the big prize in the board game world). Each player starts with an identical deck of 10 cards and spends their turns buying new cards, making their deck better and filled with more victory points. The player with the most victory points in their deck at the end of the game wins. 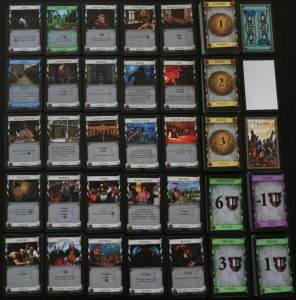 One of the major pains in the butt about playing Dominion is the constant reshuffling. At the end of each turn, you discard your hand and all of the cards you’ve played and draw five cards. If your deck doesn’t have enough cards to draw, you shuffle your discard pile to become your new deck. Since you start with 10 cards, you can see that you’ll start shuffling after your second turn, and it’s possible to have to shuffle every turn depending on the way you develop your deck.

The online version of the game handles all of this for you, which is fantastic. It also will match you up against opponents and let you have some say over the cards that will be available, or let it be totally random.

It also has a leaderboard, which is what has made the game addictive for me. The game uses a system similar to chess ratings or Magic: The Gathering ratings, but these are translated into levels. The highest levels are around 50. I’ve made it up to level 20 at my highest point, which is absurd; I do not think I’m really that good at Dominion.

Anyway, having played over 500 games of Dominion online, I thought I’d share my list of the 10 cards I least enjoy having on the table. These are the cards that I’m most likely to veto when they come up in a veto-mode game. I’ll point out that while some of these are Attack cards, implying that I prefer to play solitaire games (not really the case), a common thread is that I tend to hate cards that slow the game down. The beauty of the online game is that it’s quick – usually 15 minutes or less for a two-player game. Slowing it down makes me sad.

1. Possession. This card costs 6 plus a potion, so it’s not entering the game early. Still, when it does show up it’s just annoying. Possession lets you take your opponent’s next turn (after which your opponent does still get a turn). While it does keep you from entirely wrecking their deck, it still is frustrating to have to watch while your opponent controls your deck and you do nothing. I’ll always veto this above every other card.

2. Ambassador. At first, I had no problem with this card. It lets you get rid of two lousy cards from your hand and even give one of them to your opponent. I like cards that let you get bad stuff out of your deck. But the fact that you give the bad stuff to your opponent means that, often times, the decks don’t get better. You just keep passing the crap back and forth, which makes the game drag.

3. Ghost Ship. Getting Ghost Ship locked feels miserable. Your opponent makes you put two cards back on top of your deck every turn, and you never draw out of it. The game isn’t over yet, but you can’t make any progress. Blech.

4. Embargo. Not an attack, but a very weird card. You pick a pile of cards and make it less attractive for everyone to buy them. I’ve seen it played annoyingly, and I’ve seen it be completely ignored. I’d just as soon remove it from the game.

5. Sea Hag. I don’t mind Curses as part of game, but the Sea Hag is a pure Curse machine. She doesn’t draw you cards like the Witch or give you interesting choices like Torturer; she just gives you a Curse. And once the Curses are gone (fun fact: You’re only supposed to include 10 Curses in a two-player game) she’s dead weight in your deck. Blech again.

6. Saboteur. I almost don’t need to include this one on the list because it seems to be so reviled that most players shy away from it. Nevertheless, having your best cards trashed and replaced with something worse is not a fun experience. It’s also depressing to have a card that costs 5 to get but that’s a pure attack; it doesn’t help your own game at all, instead just hurting your opponent.

7. Duke. This is a card that’s not an attack in any way, but that still annoys me. I guess it’s because I’m used to the standard game of racing to collect Provinces (or Colonies when they’re around), and the Duke encourages you to go in a different direction – load up on Duchies and then Dukes. This means that you’ll have a greater number of Victory cards in your deck, which clogs it up and makes it feel less fun to play, even though the strategy can be quite effective.

8. Goons. I partly include this one because, like the Duke, it encourages a totally different win condition: Goon points. If Goons are on the table, you’ll ideally want to build a deck that lets you make multiple buys, preferably with multiple Goons in play. Buying a Copper for 3 victory points is a strange experience. The fact that it makes your opponent discard down to 3 cards is actually more interesting than annoying, somehow. I kind of wish this were two separate cards, one granting Goon points and one that makes your opponent discard to 3. The extra 2 money could go either way (although I guess it would just be Militia if it went with the discard… okay, I’m off track now).

9. Vineyard/Silk Road/Gardens: These are similar to the Duke, but they feel different to me somehow (and yes, I’m cheating by including three cards in one slot; it’s my list, so I can do that). I guess it’s because I’ve seen Duke be really good, but I’ve never seen anyone win on the back of these cards (okay, occasionally Gardens).

10. Navigator. I include this as a placeholder for cards that I completely ignore because they’re just not good enough. While there are rare occasions that cards like this can be useful, I typically ignore Navigator, Scout, Chancellor, Adventurer, Apothecary, Counting House, Coppersmith, etc.

Coming soon: My list of top 10 most favorite cards!