I haven’t been playing much Dungeons & Dragons lately. I wrapped up the Council of Spiders season of D&D Encounters a couple of weeks ago and was glad it was over.

That doesn’t mean I’m not gaming, though! I’m hard at work on setting up an awesome Kickstarter campaign for Chaos & Alchemy (tentative dates for the campaign are January 22 – February 21), which I think is going very well. I’ve picked up some new board games recently and am hoping to try some of them out this weekend.

I do want to get back to blogging regularly, so I’ve decided to participate in NaGaDeMon 2012 – National Game Design Month. It’s inspired by National Novel Writing Month, but for game designers instead of fiction writers. 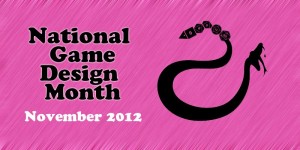 I had the idea for this game a couple of months ago. As with Chaos & Alchemy, the inspiration came when listening to a gaming podcast (The Dice Tower, in this case). There was some discussion of games that involve drafting roles, such as Citadels (which, fun fact, was the first game I played that got me into cool board games beyond Monopoly and Risk and such). San Juan and Puerto Rico have similar role mechanics.

These games consist of a number of rounds of play, each of which begins with the players choosing their “role” for the round. Each role will give the player a different special ability, and the value of each role can vary from round to round – sometimes you really want to be the Builder, and other times that role won’t help you at all. Each role can only be taken by a single player, so this “draft” of roles is very important.

The concept that I want to explore is the idea of players hanging onto their roles a little while longer before re-drafting them. While a role is inhabited by a player, the player can spend resources to improve the role. The tension here is that players want to make their role powerful so that they can take maximum advantage of it, but knowing that there’s a chance another player could get the role next round means that there’s a balancing act – one that might put a premium on jockeying for the next round’s role draft.

I like mythology, so the concept I’m going for here is that each player is a mythological God and the “roles” are legendary heroes that the gods can recruit as their Champions. Each Champion will work for their God for the entirety of an “Age” (several rounds around the board), but at the end of the Age the Gods will have the chance to lure the Champions away from one another.

The working title is Gods & Champions. 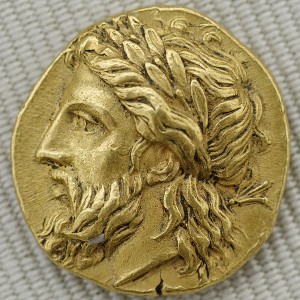 I envision the game as mainly being a card game. Most of the cards will be enhancements to the Champions’ powers. Your Champion will be represented by a big card that can hold, say, three playing cards on it. These are the “Blessings” that have been bestowed upon the Champion by the Gods, which affect what the Champion can do each turn.

I plan for each Champion to have some basic special ability, and then slots for up to three more abilities that come from these “Blessing” cards. If a Champion already has the three Blessing slots filled, a new Blessing will replace an old one (upgrading a Blessing to a new one will probably be cheaper than playing a Blessing to an empty slot, since there’s the cost of giving up the old Blessing).

There may also be some hard-to-earn cards that will stick with the God (that is, the player) rather than moving with the Champion from Age to Age. I think each God will only be able to earn one or maybe two of these throughout the game, since they’re inherently more powerful to have.

I’m thinking that a turn will consist of the Champion receiving a certain number of power points, and also taking each of the actions on the Champion’s card (the basic action that the Champion gets for free, plus any Blessings). There will be a number of “Follower” tokens up for grabs in each Age (likely a small number in the first Age and bigger numbers in later Ages).  These Followers are ultimately the game’s victory points – the God who has amassed the most Followers at the end of the game will win.

Champions will always be able to do things like spent a power point to draw a card and spend two or maybe three power points to claim a Follower for their God. The Champion inherent abilities and Blessing cards will allow for more card drawing, more power point collection, more ease of getting Followers, sacrificing Followers for cards or power, and so on. I want there to be the feel of combining Blessings to build up an engine that ultimately leads to more points.

Each Blessing will have a cost (in power points) to play. More powerful Blessings will cost more power.

There will be some cards in the deck that are Miracles rather than Blessings. Miracles will have some effect on the board and then will be discarded, as opposed to the Blessings that stay around on the Champions.

I would also like to have some Quest cards available. Completing a quest will be challenging but will come with some special rewards.

Finally, each God will have its own unique ability. Right now, I’m pondering a mechanic similar to Lords of Waterdeep, where the God’s identity is hidden until the end of the game. However, some Gods will have special abilities that could be useful during play, and the player might have the option to reveal the God’s identity (possibly for some cost) in order to take advantage of that special ability.

What do you think?

These are just some initial concepts that I’ve been noodling around in my head for a while, and NaGaDeMon is the perfect opportunity to put them out there and refine them into an actual game. This is obviously intended to be a much deeper, more strategic game than the quick-play Chaos & Alchemy. I love the mythological theme, and I think that the tension of building up a Champion at the risk of losing it in the next Age could be interesting.

What do you think? Does this sound like it has potential? What suggestions do you have to make it better?

If all goes well, I’ll have a complete rules set and card text by the end of November – an actual, playable game. I’m sure it will need refining before I consider it “done” but if it goes well, maybe this will be the second publication by Clay Crucible Games!