The blog post about my first draft can be found here. You can download the new framework right here!

Over the weekend, I had some time to improve my MapTool framework for the Marvel Heroic Roleplaying game. @MattHawke provided the key assistance: He showed me how to use custom frames to create a very, very useful character sheet.

Frames in MapTool include the Selection frame (which holds the buttons with various macros for each token), the Chat frame (which shows the output of the chat window and macros), and the Campaign frame (which holds macros common to everyone in the campaign). You can also create your own frame to hold whatever you want.

The syntax for doing this is surprisingly simple: You just use the frame roll option, followed by the name you want to give this new frame (held inside quotation marks inside parentheses). You then fill up your new frame, largely using HTML. Since I wanted to create a frame called DataFile (the Marvel RPG name for a character sheet), I used the following code:

From there, I used a bunch of HTML to fill the frame:

This allowed me to make the DataFile frame into the entire character interface. My goal is to make it so that players will never have to use the Selection window except at the very beginning of the session, to open the DataFile frame. After that, all of the stuff they can do can be done via links in the Data File itself.

I also decided it would make my life easier if I created a library token to hold all of the macros, and then simply call those macros from the Data File. 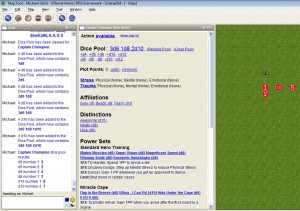 I know that other MapTool frameworks already do a lot of cool stuff with custom frames; I never really understood them until now. This is a much better way to use a character sheet, rather than looking at the pop-up window that MapTool uses by default. I’d love to re-work my D&D 4e framework to take advantage of this, but man, that would be a lot of work at this point! For now, the Marvel RPG fans are the ones who will benefit.

Please check out this updated framework. It’s light-years better than what I started with in the first draft. Feedback is invited!

– Note that you’ll need to set your stack size in MapTool to at least 4 in order for this framework to work properly. I personally set mine to 10. This is an option in the pop-up window that opens when MapTool first starts. The default stack size of 2 doesn’t cut it.