I’ve mainly been a 4th Edition D&D Dungeon Master. I had a little experience with 3rd Edition, but nothing before that, and I hadn’t run any games regularly until mid 2010. Because my players have had access to the extremely useful Character Builder program, character creation has usually been a solitary activity. Everyone creates their own character at their own home, perhaps exchanging ideas via email to make sure that we end up with a relatively balanced party, and then there’s a little bit of trying to make the characters fit with one another story-wise at the first session.

This weekend, I tried something different. I’ve known for a while that I wanted to run the ZEITGEIST campaign from EN World, and my regular in-person group seemed like the right people to try it with. One of my players, Bree, has been in massive crunch time in art school for months and has been out of gaming, but that’s finally done now (congrats, Bree!) and she’s ready for some D&D. 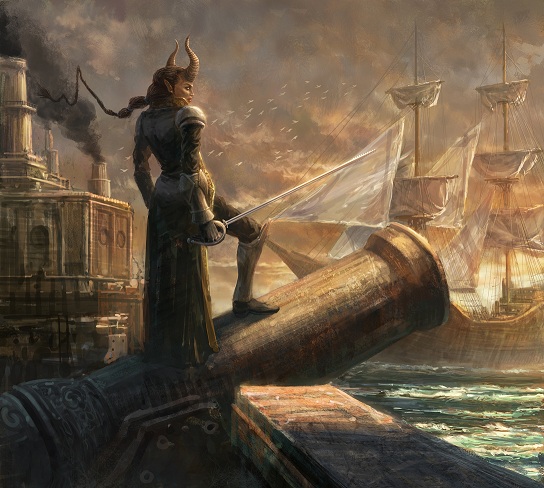 Because ZEITGEIST is a more story-focused campaign than I’ve generally run, I knew it would work better if the characters in the party had a strong connection to the world and to one another. I first floated the idea of the campaign to the players after an earlier session of a different campaign a few weeks prior, just to gauge their reactions. They seemed intrigued, so I sent them the players guide for the campaign (which you can get here).

I scheduled session zero of the campaign this past Sunday. I told everyone to bring their existing characters for the campaign that we were wrapping up, but also to have a look at the ZEITGEIST campaign guide if they had time and to start thinking about character ideas. I sent a reminder email about this the day before the session.

When everyone arrived, they seemed excited about starting a new campaign together. One person suggested that we fully roll up characters right at the table – and to use dice to generate ability scores rather than point buy. This was fine with me, so we went with 4d6, drop the lowest, assign the six scores as you like.

Thus, my recommended steps for Session Zero of a new campaign:

Step 1: Tell the players about the campaign at least a week ahead of time. Since this was a published campaign, I sent them the players guide. Had it been a home brew, I would have described whatever made my idea special and unique, so that they could “get” the idea of the campaign and start thinking about character ideas.

Step 2: Schedule a session specifically for character creation. Since we also like to actually play D&D, too, I suggest still having a one-shot game with existing characters as a side show to the main event of character creation (ideally your players won’t be jumping right in with the new characters – see step 10).

Step 3: Sit down together and talk about the character hooks for the world. In the case of ZEITGEIST, this meant the eight campaign-specific character themes, which I explained were recommended but not required. In a different campaign, this could be talking about the different regions of the world that the PCs might hail from, or unique ways that particular races or classes are viewed in this world.

Step 4: Ask if anyone is particularly intrigued by any of the hooks, and if anyone already has strong feelings about what race and/or class they want to play. Let the people who already have ideas here be the first to speak up.

Step 5: As the rest of the players one by one what appeals to them or not about the options that are out there. If they’re non-committal at this point, that’s okay; ask if they have any feelings about something broad, like the combat role they want to play. If a player is willing to fill in whatever role is needed, no problem. You can come back to that player.

Step 6: Start going through specific class (and later, race) options. I used the Character Builder for this, but solely as a convenient all-inclusive list of the classes. If someone wants to be a controller, present them with the different controller classes and say a few words about what each class is like and the ways in which that class might fit into the world or the ways in which you would re-fluff it for this world. Jump around a bit from player to player in this process.

Step 7: As people start getting their classes chosen, start handing out books (if the players don’t have their own) and blank character sheets. I liked getting to use my physical books for a change, handing Heroes of the Feywild to the person rolling up a Witch and Players Handbook 2 to the player rolling up a Bard and so on.

Step 8: Generate ability scores. We used 4d6, drop the lowest, and we went one by one around the table so that everyone could watch. This was surprisingly fun to do! Point buy would have been fine, too, though. Start assigning those scores to the abilities, and adding in racial bonuses as the players make their race selections.

Step 9: Talk about the choices that everyone is making. There’s a lot of opportunity for give and take at this point. The players will want to get one another’s (and the DM’s) input on the different options available. Maybe someone will suggest a class or race change, either because of the way the character is shaping up, or in an effort to make characters fit with one another. Perhaps someone will suggest a name for someone else’s character. This a good thing!

Step 10: Set character creation aside until the next session. At this point, the players who have the Character Builder will probably want to get their characters set up in the program so they can browse feats and more powers and so on, and perhaps even reconsider their race or class choices. That’s okay. Let them do the fine-tuning between sessions before actually running the new character.

I have to say that I think this process went really, really well. The players seemed to have fun, and their characters definitely make more sense in the world of this campaign and relative to one another then they would have if everyone had created characters on their own.

Once this process was done, we had some food to eat and then played a one-shot game with characters that they already had from an existing campaign. We set a date for our first actual ZEITGEIST session sometime over Christmas weekend. I can’t wait to get it going!