I spend a lot of my D&D time over on EN World, surfing the various forums. It was a great resource for me when I was first learning D&D 4e in early 2010, and it’s where I found the players for my long-running Friday night online campaign. EN World also published the adventure path that I’m using for that campaign, War of the Burning Sky (which I’m very much enjoying running).

Thus, I was excited late last year when word started coming out about their next campaign saga, called ZEITGEIST. I was lucky enough to get into a play-by-forum playtest of the first two adventures run by the author, Ryan Nock. Ryan’s a fantastic writer, and his descriptions of our combats were amazing. Since we were really just running through the adventure to help Ryan fine-tune the plot rather than the combat encounters, he just narrated the fights, and yet this was probably even more fun than rolling the dice would have been. 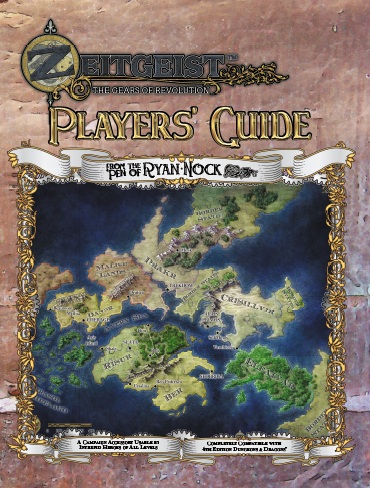 I’ve been pretty geeked about this campaign path for a while, so I’m excited to say that the two-page introductions to the campaign as well as the 41-page player’s guide are now available, both for D&D4e and for Pathfinder. I have no idea what if I anything I’ll ever do with this campaign, since I’m pretty much full-up as a DM right now, but I could see maybe running it for my in-person group in the future if I decide to take another turn in the DM chair for that group.

2 thoughts on “ZEITGEIST adventure path for 4e and Pathfinder is here!”