I haven’t posted in over a week, largely because I’ve been out of town for most of that time.  However, the time has not gone to waste from a D&D perspective, as I’ve spent time reading the new Dungeons and Dragons Essentials book, Heroes of the Fallen Lands. 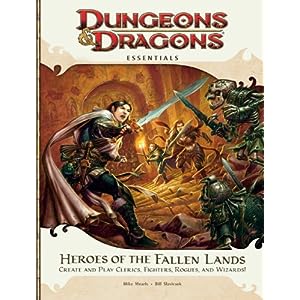 This is really the big new book for Essentials – the one that people who fear 4.5 Edition are really afraid of.  This is where things are changing.

Here’s what you get in HotFL:

The fundamentals of D&D 4th Edition are still here, and I don’t see it as a new edition (or half edition). I see it as some rules tweaks and some new options.  It doesn’t feel more revolutionary than the second or third Player’s Handbooks or the Martial/Arcane/Primal Power books for the most part.

Every race except human now has stat flexibility – one fixed ability gets a +2 bonus, but there’s a choice of two other abilities to get another +2 bonus.  For instance, the Dwarf still gets +2 Constitution, but instead of being locked into +2 Wisdom for the second boost, the Dwarf can choose either +2 Wisdom or +2 Strength.  Yes, it’s “power creep,” but I don’t care all that much.  I’m strangely feeling inspired to go against type anyway and build “the world’s buffest Wizard” with a big racial bonus to Strength or something like that.

The human still gets +2 to a single stat, but instead of a bonus at-will power the human gets a power that lets you retroactively add 4 to a failed roll to hit or to a failed saving throw.  Fine by me.

So races – no major changes.

Here is where some people seem to think Wizards of the Coast is making massive changes and that 4th Edition as we know it is gone.  I disagree.

There are five new builds presented in this book.  Two Fighters (the Slayer and the Knight), one Rogue (the Thief), one Cleric (the Warpriest) and one Wizard (the Mage).  The big changes are a departure from the common class structure (no longer does every class get the same lineup of at-will, encounter and daily powers as they level up – some get no dailies at all) and a breakdown of the link between class and role (the Slayer is a striker, but every other Fighter build is a defender).

These new builds are exactly that – new builds.  The Mage is not very different from other Wizard builds, nor is the Warpriest a huge departure from other Clerics.  The Slayer, Knight and Thief are undeniably different from earlier Fighters and Rogues because they focus on melee basic attacks and don’t get daily powers.  They don’t get at-will attack powers, either – they get either stances (for the Fighter builds) or tricks (special moves for the Thief).

I see the new Fighter and Rogue builds as, well, new builds.  They seem like they might even be fun for some players!  I imagine that I would personally get bored with the same few options forever as I played one of these characters up to level 20 or 30, but a player who wanted to keep things simple would probably greatly enjoy these builds.  The same goes for the Warpriest, just because you don’t have to make a lot of choices as you level up.  I personally LIKE making choices as I level up, but I respect that not everybody feels that way.

Magic items are now either common, uncommon or rare, and players by default can only buy common items (the others are awarded in treasure hauls as the DM sees fit).  Fine by me, as both a player and a DM.

Feats have been organized by what you want to do (have more toughness, be better at skills, wear cooler armor, etc.).  There are some feats here that I really like, such as Master at Arms (+1 to attacks with weapons, and you can use a minor action to simultaneously sheathe one weapon and draw another).  These feats work just fine with existing classes, and the new builds are allowed to take existing feats.

I’ll admit that I was confused by the table on page 344 of the book that talks about magic armor.  I haven’t played any characters above level 4 yet, so this hasn’t come into play, but apparently once you get to level 6 the inherent bonus of your armor gets better (in addition to the enhancement bonus).  I think this is a reference to masterwork armor, though I’ll admit I’m confused.  I thought plate armor was always +8 to AC, with magic plate armor adding something from 1 to 5 on top of that.  Apparently magic plate armor at level 6 is +9, and if it’s +1 armor that’s a total of +10 to AC.  I have so much to learn!

On another note, I love the “fluff” in this book – that is, the stuff that’s not pure rules “crunch”.  Races now get six full pages to help you understand what it’s like to BE a member of that race so that you can play it more effectively.  Classes get some ridiculously awesome artwork.  I’m not an artwork guy, so if I notice the art it must be pretty good.  I LOVE the elf rogue who shows up on the back cover and on page 170.  The elf knight on page 125 is way cool, too.  (I apparently have a thing for elf chicks.)  The halfling thief on page 172 is also badass (see, it’s not just elf chicks).  Good stuff.

I like Heroes of the Fallen Lands.  I could see myself playing around with some of these characters (somehow the Sun Warpriest seems like a lot of fun).  I could see using them to introduce new players to the game.  I can also see them existing merrily alongside the classes we know and love, with more options now available to those classes (feats, powers, racial abilities).  It’s good for the game, in my opinion, and I have no qualms about the direction of 4th Edition.  Essentials looks like fun to me!

2 thoughts on “Essentials thoughts: Heroes of the Fallen Lands”