And so the adventure begins!

We had a total of twelve players for two tables of D&D Encounters at 5:00 PM at Enchanted Grounds today. I had four of the same five players from last week (father, son, daughter, another boy) plus two more players (adults). Our party consisted of:

They decided that the four goblins were traveling together, and the drow and svirfneblin were another pair of travelers. The drow saw himself as a spy for the underdark. Hm. This could be interesting.

Six adventurers walk into a bar; specifically, the Old Skull Inn of Shadowdale. After some suspicious glances at the rather monstrous party before her, Ghessla Silvermane welcomed the group to her inn (extracting a promise that they weren’t in Shadowdale to cause trouble – especially the drow). She waved her burly employee Thrad over to start taking some meal orders. The Shadowdale Special was popular with the goblins (especially after the drow mage used Prestidigitation to make their meals wiggle).

The goblin hunters explored upstairs, finding that half of the second and third floors were under construction for some renovations. Downstairs, the goblin scout made friends with a smelly old man called Old Dogsbreath. He started raving about seeing drow in the woods, which Zin was quite curious about.

An attractive woman with long, dark hair told Zin that she was known as Khara Sulwood, and she had recently moved to Shadowdale. She mentioned that Doust Sulwood was her great-grandfather; Zin recognized the name as belonging to a lord of Shadowdale long ago.

A pair of dwarves welcomed Pointy into their merry drinking games.

After a while, folks started heading for bed. Ghessla pulled some of the party members aside and mentioned that allowing people into the Underdark was strictly forbidden under the laws of Shadowdale, laws that just aren’t worth breaking for less than, say, 100 gold pieces. She’s a fun one, that Ghessla.

When down in the inn there arose such a clatter…

Wouldn’t you know it, the quiet of the night was broken by a commotion downstairs. Everyone rushed down to find that the inn was under attack by drow! One invader attacked Ghessla, who crumpled to the ground, her light going out (I was using lighting features in MapTool for the first time, so this was cool). Old Dogsbreath was menacing a drow using his rusty dagger, and the two dwarves were in the process of surrendering when the heroes charged down the stairs. 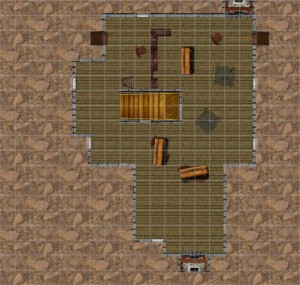 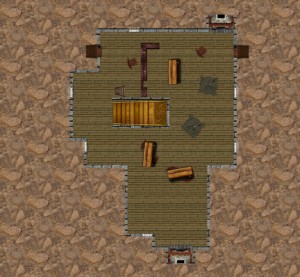 Sounds and sights of more fighting were noticed outside the inn, so it was going to be up to this ragtag group to save the Old Skull Inn themselves.

Fortunately, they were up to the task! Noticing that I had used a female drow picture for the archer, Zin (our party’s drow) told the gang to try to get after her, since female drow tended to be nasty. Clouds of darkness started popping up left and right, especially once more drow came up from the cellar in round two, but a couple of PCs used their amulets from the character creation week to make the darkness go away.

Poor Snarl couldn’t land a hit on the drow he went after, even burning his action point. He soon found himself bloodied and poisoned, with Ziti having to heal him twice.

As the battle wore into the third and fourth rounds, the adventurers got the upper hand and turned the tide once the strikers started rolling well. The goblins and svirfneblin discovered that I would let them move freely under the tables of the inn, which was great fun. Before long, the inn was littered with the corpses of vanquished enemies, and Ghessla was popping up off the floor, having only played dead.

As the inn patrons were thanking the party and everyone was assessing the damage, Ziti the svirfneblin suddenly heard a voice begin speaking in her mind: “This is Elminster…”

And on that note, we wrapped up week one. Pretty cool stuff!