Deprecated: Methods with the same name as their class will not be constructors in a future version of PHP; WPOnlineBackup has a deprecated constructor in /home/b2omeohdmp46/public_html/wp-content/plugins/wponlinebackup/wponlinebackup.php on line 91
 Kickstarter recap: Chaos & Alchemy | Online Dungeon Master
Skip to primary content

Edit: This post originally went live on September 5 before it was finished. I fail at post scheduling sometimes. Sorry about that!

The Kickstarter campaign for my first game, Chaos & Alchemy, successfully finished on August 23. Today, I’m looking back at the campaign to share what I’ve learned and to thank the many, many of you who signed up to help my dream become a reality

Let’s begin at the end: How did we do?

That’s an unqualified success in my book! How did we get there?

It’s worth noting the history of Chaos & Alchemy. I did a small (125 copies) self-published print run with black and white illustrations in mid 2012, which I sold through by last October. I then started planning my own Kickstarter campaign to fund full color artwork and a full size print run.

In preparation for that campaign, I sent copies of Chaos & Alchemy to several game reviewers and set up some advertising (primarily a video preview by Tom Vasel of the Dice Tower). I also got manufacturing quotes, started lining up illustrators, etc.

Then, Game Salute stepped in to publish my game. I no longer needed to worry about manufacturing and hiring illustrators, but the review copies and advertising would still come in handy (although I had to tell those folks to delay their reviews and ads, since Game Salute needed more time).

Also, having a hundred or so copies of Chaos & Alchemy in the hands of gamers who had bought the original print run definitely helped. I already had ratings on BoardGameGeek and some honest-to-goodness fans of my game out there. Most Kickstarters don’t have this luxury, but I can tell you that it helped.

It took about eight months from the signing of my contract with Game Salute until the launch of the campaign. The most important things that happened during this time were the new graphic design and illustration. Dann May did a great job with the former, and Enggar Adirasa is doing a great job with the latter.

20 of the 43 cards were finalized before the Kickstarter campaign launched, which was hugely important. Being able to show backers what the game was going to look like, even if it wasn’t completely finished, mattered a ton.

Game Salute had some more review copies of Chaos & Alchemy printed and sent them to more reviewers in preparation for the campaign.

They also figured out the manufacturing cost and the plan for pricing the game. My original print run shipped with 26 dice, but that was going to be prohibitively expensive for Game Salute. We would either need to have an unacceptably high pledge level to get the game, or lower the cost somehow.

I campaigned hard for the latter, and we ended up going with a “pass the dice” approach. The game would come with 10 dice instead of 26, which is enough if players pass the experiment dice and free success marker around the table rather than giving each player their own. I think this was the right choice, as it made the pledge level to get Chaos & Alchemy $25 instead of $30 or more.

I also sought input on the campaign page from people whose opinions I value, including the BGG game designer forum and the Card and Board Game Designers Guild on Facebook. I highly recommend doing this for your Kickstarter campaign.

For launch day, I had arranged to take a day off work. We launched around 10:00 AM Mountain time (I live in Colorado), and I spent most of the day spreading the word.

I went a little nuts with my excitement on Twitter; I recommend not overdoing it (but people will cut you some slack if you’re just overly excited).

I updated the Clay Crucible Games and Chaos & Alchemy web sites to include links to the Kickstarter.

I thanked the BGG and Facebook designers groups for their help with the campaign page, also mentioning that it was now live.

I sent emails to people who would be interested in the game. I went with personalized emails for most of these, though I had a copy-and-paste email for the people who had signed my sheet at Denver Comic Con to be notified of the Kickstarter.

I kept checking the Kickstarter page itself, keeping a close eye on the comments so that I could answer questions. Same goes for BoardGameGeek; I made sure to chime in on threads where people were discussing my game, especially where there were questions I could answer.

I stayed in close contact with Game Salute about the questions that I couldn’t answer – namely, anything to do with money.

And I stayed up late to watch the campaign hit its funding goal on the first day. Huzzah!

As the campaign rolled along, I spent a lot of energy talking to Game Salute about stretch goals. We had some goals in mind, but I don’t think Game Salute was expecting to need them quite so soon!

The initial stretch goal plan was not well received by backers. Basically, we started adding extra dice to the game every few thousand dollars. This went over like a lead balloon.

Plans were revamped. $15K became the level to get a cool cube to mark the Free Success. $20k would come with upgraded art for the success / failure tracker card. $25k would get upgraded card stock. 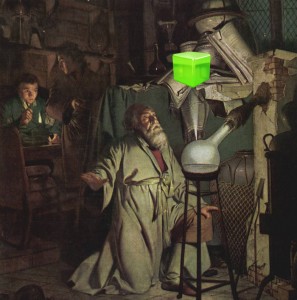 The big one, though, ended up coming at $18k: the Enhanced Edition. See, I had designed the Substances expansion last year, and it’s a lot of fun. I know that fans will love it, and the only question was at what level it would become economical to make it available.

Ultimately, with the campaign mired in the mid-campaign slump, Game Salute decided to pull the trigger and unleash the expansion. This was important not just because it made more content available, but also because it gave fans a way to pledge more than $25 if they wanted to support Chaos & Alchemy (the Enhanced Edition cost $39).

This is a important point: it’s really useful to have ways for fans to pledge at higher levels if they want to do so. Game Salute is very opposed to add-ons (custom dice bags, premium game box, play mats, sleeves, etc.), which is one common way of creating premium pledge levels. The Enhanced Edition gave us this option without adding too much administrative complexity.

One nice feature of the timing of this campaign was that it was running during Gen Con. Game Salute had scheduled six Chaos & Alchemy events, which all sold out pretty quickly even though the Kickstarter campaign came way later than the Gen Con event sign-up period. I asked my players at the GenCon events what led them to sign up to play this particular game, and it was largely because it was something new and it sounded interesting based on the name and description. A few even mentioned the good ratings on Board Game Geek!

Ultimately, though, Gen Con didn’t make a huge difference to the campaign because no one was demoing it in a booth. My Gen Con was really about pitching my new games to publishers, not about Chaos & Alchemy.

Most Kickstarter campaigns get a significant boost in the last few days, of course. This is partly because of that reminder email – people who glanced at the campaign a few weeks ago will take another look, see the stretch goals that have been reached, and decide to get on board. I think the boost is also in part because of human nature – many of us are procrastinators!

Looking at other gaming projects, I was trying to guess how much of a boost we might get in that final stretch. I was estimating that 20% of our funding could come in the last 2-3 days.

As it turns out, the final boost was much bigger – we got about 30% of our funding in the last three days.

I think a big part of the late-campaign success was the $35K stretch goal that was announced near the end of the campaign: custom dice.

This at last was a stretch goal that people were really excited about, and I’m so glad we got them!

In the end, the Kickstarter campaign for Chaos & Alchemy was tremendously successful. We hit 800% of our funding goal and managed to unlock the expansions and the custom dice. My personal work is mostly done; I just need to finalize the design of the new Apprentices mini-expansion (let me know if you’re interested in playtesting!). I’m really looking forward to seeing the finished products in my hands – and in stores – next year.

Thank you so much to everyone who supported me!