Deprecated: Methods with the same name as their class will not be constructors in a future version of PHP; WPOnlineBackup has a deprecated constructor in /home/b2omeohdmp46/public_html/wp-content/plugins/wponlinebackup/wponlinebackup.php on line 91
 Pitching games to publishers at Gen Con 2013 – Part 1 | Online Dungeon Master
Skip to primary content

Gen Con 2013 was wonderful! While I did get to play some games, most of the time was spent meeting people, and I loved it.

This was a “work” Gen Con for me; I was there mostly to pitch games to publishers. I did a small, self-funded print run last year with Chaos & Alchemy, which led to Game Salute picking up the game for publication. That has worked out great, so yay! (We’ve just hit the $25,000 stretch goal on the campaign with several days to go – please check it out if you haven’t yet!)

But in the future, I would prefer to not deal with self-publication. I want to be a game designer, not a game publisher. That means that if I want my games to see the light of day, I’m going to work with publishers and convince them to publish my games.

Today I’m posting Part 1 of my recap of my publisher meetings at Gen Con 2013, since this ended up being a LONG post. This part covers Thursday (a busy day!). I’ll post Part 2 tomorrow. (Here it is.)

Months before Gen Con, I reached out to a large, well-known publisher to see if I could meet with them at the Con to talk about Alchemy Bazaar. This was a little out of my league, frankly, but I figured why not? 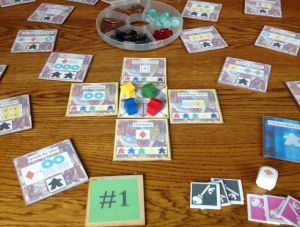 I had 30 minutes Thursday afternoon to meet with the head of this publisher in the publisher’s dedicated room at the Con. I really enjoyed this meeting, as it turned out. I was mostly there to pick the publisher’s brain on how they think about this sort of game. The publisher liked the core “worker movement” mechanic of Alchemy Bazaar, but did NOT like the randomness from the Ingredient Die and from the Action cards.

What I took away from this meeting was that different publishers are looking for different things. This particular publisher doesn’t like much randomness in games (which surprised me a bit, knowing some of the games they publish). Now, I could certainly tone down the level of randomness in Alchemy Bazaar. I think this would make for a less interesting game, but if I officially submit Alchemy Bazaar to this publisher, it’s a change I could make.

At the end of the meeting, the publisher said, “Once the game is finished, if you don’t find another publisher, come talk to me.” I realized that despite some criticism (delivered well, I hasten to add, not cruelly), this publisher is actually intrigued by Alchemy Bazaar. That’s a great sign!

Thursday night, I had two hours at the Publisher Speed Dating event to pitch my games. I want to give a huge shout out to James Mathe of Minion Games for setting this event up in the first place (web site, Twitter, Facebook). This was the part of Gen Con that I was most looking forward to, and it was fantastic. Thank you, James!

From 9:00 to 10:00 PM, I was at a table in a medium-size hall (20 tables total, I believe), demonstrating my light cooperative mountain climbing game, Everest. This was for the “light family game” track of the speed dating event. 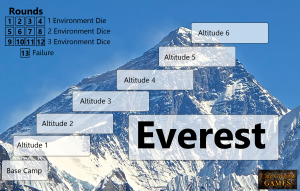 I believe at this point there were five or six publishers on the light game track (I think there were more in the 7:00 to 8:00 and 8:00 to 9:00 slots, but unfortunately I had a late-night time slot and some publishers couldn’t stay the whole time). They would spend five minutes at a table, hearing a designer talk about a game. At the end of five minutes, a bell would ring and the publishers would move to the next table to hear about a different game from a different designer.

Everest was very much my “secondary” game at Gen Con; I’ve been spending far more energy on Alchemy Bazaar. This is part, though, because Everest is fairly simple, so it didn’t take as much design work to make it a pretty polished game.

I was very energized giving these quick pitches. Five minutes is not enough time to actually PLAY any of these games, but it’s enough time to describe what the game is all about and why it might be of interest to a publisher. I usually finished talking about the game in three minutes, leaving two minutes for questions from the publishers. I highly recommend this kind of balance in a pitch; if the publisher is interested, they will want to be able to ask questions.

I’ll also note that the designers were asked to make sell sheets available for their games – a little one-page sheet that gives a publisher the important information. Here is the Everest Sell Sheet. This sheet also included my contact information so that publishers could follow up with me if they were interested in the game.

One particularly interesting bit during this process game when a publisher heard the first part of my pitch and said, “This isn’t the kind of game we’re interested in. What else have you got?” I mentioned Alchemy Bazaar, which I didn’t think would interest this publisher either – and it didn’t. But I then talked about an early work-in-progress design called Robo Battle. It’s only had three play test games so far, but it’s quite promising. This publisher was intrigued and asked me to come by his booth later in the con for a quick demo of Robo Battle. All right, then!

This was the “main event” for me, so I was sad that it was taking place so late at night (10:00 to 11:00 PM). The biggest-name publishers had already left by this point, but I still had about five publishers to talk to on the “heavier Euro game” track about Alchemy Bazaar. You can see the Alchemy Bazaar sell sheet here.

One highlight of this cycle of pitches was when one “micro publisher” (as he described himself; only one published design so far) sat down and immediately told me that he was at this event in part because he wanted to see Alchemy Bazaar. He already knew me by reputation and was intrigued by what he knew of the game so far. That was a fantastic feeling! He was interested in Everest, too.

My first follow-up meeting came immediately after the Publisher Speed Dating event wrapped up. The micro-publisher I mentioned above really wanted to see Everest and wanted to have a chance to try a bit of Alchemy Bazaar, so we stayed after the speed dating event to play some games.

This was a great meeting, even though it might not lead to anything. As it turns out, Alchemy Bazaar is a bit heavier of a game than this publisher was expecting, and Everest might be too light of a game. Still, the working relationship with this publisher was really good; we clicked well. We might end up working together on one of these games, but even if we don’t, we might work together on a different game in the future.

And since Everest is such a light game, I had made up a couple of extra prototypes without the bits (just the map, rules, cards and reference sheet), stuck in Tyvek envelopes, that I could leave with publishers who expressed interest. I left one with this publisher, which he appreciated; it sounds like his young son might enjoy this game.

Tune in tomorrow for more. And don’t forget to check the Chaos & Alchemy Kickstarter!