I don’t write about my long-running Friday night War of the Burning Sky online game nearly enough. It’s time to correct that.

Spoilers ahead for EN World’s War of the Burning Sky campaign – specifically, the end of Adventure Six.

This past Friday night, I gathered via MapTool and Skype with my group for our regular D&D game. The party was at 18th level, and they found themselves high up  in a castle with a raging firestorm above it (which they had held back with a magic item). The top level of this castle contained a rift to a fiery plane. They were here in search of a powerful magical torch.

During the last session, the party had fought a legion of fiery undead soldiers and explored the rest of the top level of this castle, which was reachable only via a hydraulic lift. As this session began, they had finished most of their exploration, when they heard the lift start to rise. The wizard/swordmage decided to cast Arcane Lock on the elevator door. It takes 10 minutes to cast. Uh oh!

So, I began by asking everyone what they were doing while the wizard/swordmage was casting her ritual. Some were standing guard near her, while others were loading treasure and people into this magical flying sled they had discovered. At this point, a little halfling NPC who had seemed rather dumb for the whole adventure popped into the room through a wall and started animating a dragon skeleton. And wouldn’t you know it, the whole “dumb little halfling” look was an illusion; the creature revealed itself to be a tentacled monster called Deception (a trillith). 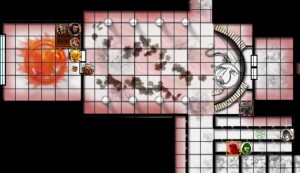 The fight began with most of the party in or near the cart in the room with the Dark Pyre, while a couple of them were through the banquet hall and down the hallway leading to the elevator doors. The animated dragon and the tentacle monster rather neatly cut the party in half.

Now, keep in mind that most of the party was entirely out of healing surges at this point, with no significant daily powers left. Their goal was escdape: Use the magical flying sled to burst through a window-wall in the Dark Pyre room and fly to safety, all before whatever ba guys were in the elevator made it to the top.

Our brave dwarf fighter threw himself at the dragon to try to keep it at bay to give the cut-off characters a chance to get to the sled. Unfortunately, the tentacle monster phased through some walls and started dominating the swordmage.

I used the house-ruled version of Dominated in this game that I’ve been playing with for a few weeks (with great results in my opinion:

This way, the dominated character still gets to do some good stuff on their own turn, but they’re also potentially wrecking their allies at the same time (which, you know, is fun). It worked out really well, in my opinion.

“I teleport out the window!”

Anyway, after some near-blinding of the bad guys, the party made its way to the cart, with the dragon and Deception hot on their heels. The dragon’s breath weapon then tried to dominate a whole bunch of folks, including our genasi pyromancer. As a free action, he used a power that would remove him from play and let him reappear within 10 squares at the beginning of his turn – still dominated. He reappeared OUTSIDE the big window that the sled was going to smash through; this left him 100 feet off the ground, above an invading, hostile army.

He used his one action (since he was dazed, thanks to my domination) to swap in Feather Fall, which saved him from death, but put him on the giant bear skull sculpture above the castle entrance. Some of the army members were eladrin, who teleported up onto the skull with him. The pyromancer quickly surrendered, realizing he was in a bad spot. 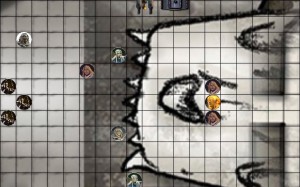 Meanwhile, back up in the castle, the party expended tremendous effort to get the warlock’s hell hound pet out of the clutches of the tentacled Deception and into the sled. The swordmage/wizard Thunderwaved the monsters away and the dwarf rushed out of the cart, hauled the hound onto his shoulders (burning himself in the process) and rushed back in.

Our warlock hit the gas on the magical flying sled and smashed through the window-wall. Whee!

Someone asked, “Hey, does smashing through the wall cause rubble to fall down on the eladrin who’ve captured our pyromancer?”

Excellent idea! The rubble hit the pyromancer as well, and the sled spiraled down to a stop next to the captive. Some fast talking by the swordmage convinced the eladrin to hand over the badly-wounded genasi.

“Not without my wyvern!”

Only one problem remained: The party had left the dwarf’s wyvern mount tied up outside the castle when they came in, and poor Wendy was now trapped in a cage by the army. I decided this army was cruel, so I had a half-orc deal a killing blow to the wyvern, right in plain sight.

The PCs asked if they could fly the sled so that it would smash into the half-orc – oh heck yes! The evil soldier went flying off the edge of the cliff on which the castle was situated, plummeting to his death 1,000 feet below. 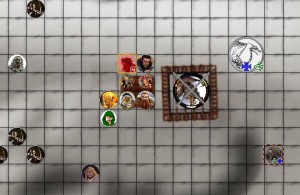 With the dragon in pursuit, it seemed clear that it was time to take off and fly away… but our fighter couldn’t just leave his poor mount’s corpse to the evil invaders, so he grabbed onto the cage.

“Where did that thing come from?”

No problem! But now the sled was flying at half speed, and the dragon was gaining on them. To make matters worse, it turned out that the tentacle monster had used a power when the sled was back in the castle that let him invisibly teleport into their midst on the sled, leaving an illusory duplicate of himself behind. And now that the sled was flying away with a huge cage full of wyvern body dangling behind it, a bunch of tentacles came out of nowhere and started grabbing the party.

Our swordmage decided to turn once again to Thunderwave, shoving the tentacled beast out of the sled – but oh crap, that thing can fly!

There was only one thing to do, with the tentacled Deception bearing down and the dragon coming on from a distance: Our fighter tossed the wyvern cage at Deception, sending the thing plummeting to its doom.

No longer weighed down by the cage, the sled was able to fly away (with our warlock keeping her pet outside of the sled itself so that it didn’t burn the whole party to death), seeking safety, an extended rest, and a level up to 19.

Whew! Have I mentioned that my players are awesome? Thanks everyone!

3 thoughts on “Dragons and tentacles and flying sleds – oh my!”