Last year I participated in National Game Design Month, better known as NaGaDeMon. In case you haven’t heard of it before, NaGaDeMon is inspired by NaNoWriMo – National Novel Writing Month. Instead of trying to write a 50,000 word novel in November, I’m trying to design a game.

My effort last year was called Gods & Champions. It was the second game I tried designing (after Chaos & Alchemy), and while I ended up with some fun stuff, I ultimately realized that the core mechanic I wanted to explore just wasn’t that fun. I could have a fun game, but it would involve going in a totally different direction, so I decided to move on to other games instead.

This year, I’ve decided to work on a game entirely inspired by theme: 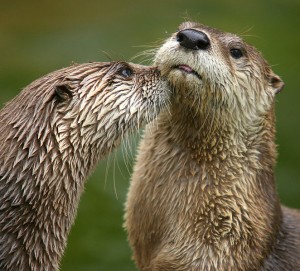 Let’s face it: Otters (especially river otters) are freaking adorable. As a kid, I loved the Christmas special called Emmet Otter’s Jug-Band Christmas. It featured adorable otter Muppets that sang and played musical instruments. Later in life, I visited an aquarium and was captivated by the cute river otters.

So, for a few months now I’ve known I wanted to design a game themed around otters. I wanted it to be kid-friendly, and I wanted it to have adorable otter art.

What would be the mechanics of this otter game? I had no idea.

I started by researching otters and what they do. And while they’re adorable creatures, nothing about their lives really inspired any game mechanics in my mind. I let things just simmer.

Scavenging mechanics from other games

Then, a couple of weeks ago, I found myself playing a game that I really want to like but that I actually don’t enjoy much: Smash Up. The theme of Smash Up (pick two cool faction mini-decks, like ninjas and wizards, and shuffle them together) sounds like a lot of fun. The art is awesome. And yet the game has been a drag both times I’ve played it. 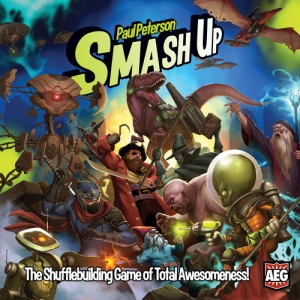 Smash Up by AEG

Smash Up seems like it wants to be a simple, quick, wacky game, but most of the factions have some fiddly mechanics that can lead to analysis paralysis. It’s also quite fiddly to keep track of everything on the board; with all of the abilities from the base cards plus the ongoing abilities from the creatures and actions that have been played to those bases, it can be really hard to even know what the total value of cards at a base currently is. The game ends up taking way too long for the amount of fun it contains, in my opinion.

So, my idea for the otter-themed game: Take the basic idea of Smash Up (playing cards from your hand to shared “bases” on the table in an effort to bring the total value of the otter cards on a base up to a target number) and simplify it, using cards with pictures of adorable otters.

Thematically, the “bases” will be playgrounds for otters (ponds, lakes and rivers). When you have enough otters in a playground to fill it up with fun, you score points for that playground.

Typically, I make quick and dirty prototypes for the earliest designs of my games. However, since Otters is all about adorable pictures of otters, I started using cards with art right from the beginning.

Now, I don’t personally own the rights to any otter photographs or illustrations, so I’m not going to show you what my prototype looks like here on my web site. Suffice it to say, I found adorable otter pictures online and popped them into a simple template.

Playtesting – you can help!

So far I’ve playtested Otters four or five times, with only small tweaks to the mechanics and rules along the way. It’s actually pretty much where I want it to be right now.

Otters is a quick (10 minute) 2-player game that’s easy for kids but still contains interesting decisions for adults. I might end up trying to expand it for 3 or 4 players, but I’m pretty happy with where it is as a 2-player game.

Furthermore, the only components are 54 cards. That’s it – no dice, no counters, no meeples, no board, not even some spare coins. Just a deck of cards. One of those cards is just a rules reference! I’m thinking I might ultimately make this game available via DriveThruCards or something like that.

If you’re interested in helping me to playtest Otters, send me an email at ClayCrucible@gmail.com, and I’ll send you a PDF with the 54 cards of the game. I personally recommend printing them on regular paper, cutting them up, and dropping them into sleeves with Magic cards or something similar.

I’ll continue to post about my progress on Otters throughout November. I may be able to go from zero to game-available-for-sale during the course of the month. That, of course, will rely on me working with a graphic designer to make the cards look nice as well as acquiring the rights to some adorable otter photography (plus an alligator image as well as some ponds, lakes and rivers). I think this can be done, though. (If you have any tips on where I might be able to get such rights, let me know.)