Playtesting continues apace on my newest game, Alchemy Bazaar, and it’s going really well so far. I had a great session over the weekend with a friend who is also a game designer, and as I had hoped, he helped me identify something to simplify in the game (no more tile ownership to track). I’ve put together a new set of tiles and cards, cleaning things up and adding more flavor, plus more creative tiles. Fun times! 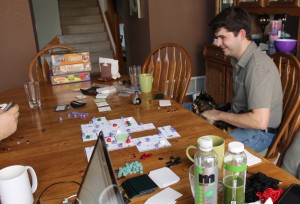 Playtest 4 in action, with Michael getting help from Buttercup the cat

In the mean time, I wanted to talk a little bit about the scoring mechanic I’m using for Alchemy Bazaar. As I’ve said before, Lords of Waterdeep was a big inspiration for this one, and both games have a similar mechanic of collecting “quest” cards (Formulas in Alchemy Bazaar) and completing them throughout the game for points.  In Lords of Waterdeep, these points are tracked on the game board.

For Alchemy Bazaar, there are two reasons I didn’t want to go with the “points tracked on the game board” approach. The first is that there is no game board; the “board” builds up over time as players add new shop tiles to the bazaar. That’s not a deal-breaker, though; if I wanted, I could include a small side board just for point tracking (a la Seasons and some other games).

The main reason I skipped the scoreboard is that I want to avoid “analysis paralysis” where possible. Alchemy Bazaar is intended to be more strategic than Chaos & Alchemy, but I don’t want it to devolve to the point of players spending 10 minutes staring at the board before moving. One factor that can contribute to analysis paralysis is knowing exactly how far ahead of or behind the other players you are. I want players to have a general feel for whether they’re doing well or not, but I don’t want a precise number on it until the game ends.

So, I’m going with point cards. Whenever you would score points, you draw a certain number of cards from the point deck (I”m calling them Knowledge cards in the current playtest, but they might end up as Wisdom or something else). These are very simple cards with a single number on each. There are an equal quantity of 1, 2 and 3 point cards in the point deck, plus a sprinkling of 5-point cards. 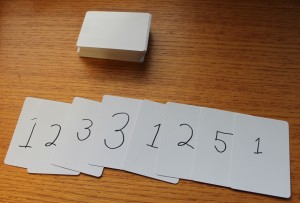 I’m loving this mechanic so far. It helps to head off analysis paralysis and adds the potential for someone who’s behind to get a bit lucky and draw better point cards. It also opens the door to mechanics that let you discard point cards of your choice (get the 1-pointers out of your hand in the hopes of drawing 3s and 5s). This hasn’t changed in the slightest throughout playtesting so far; I think it’s a winner.

If you’re interested in joining the playtest for Alchemy Bazaar when it gets beyond the alpha stage, drop me a line at claycrucible@gmail.com. I have some playtesters lined up, but I wouldn’t mind a few more!