I’m so excited and happy to be running D&D Encounters again! I ran Encounters last summer for the Dark Legacy of Evard season (recaps of those sessions start here), and I had a blast. I especially love helping newer players get into D&D, and Encounters tends to attract a lot of new players.

This time, the season begins with a “week zero” session for character creation. I had been told that most players don’t bother showing up, since they’ll just make characters on their own in the Character Builder later. I’m happy to say that the players at the 5:00 PM tables decided that week zero was important. I believe we had nine players show up just for character creation.

Once again, I’ll be using my projector rig to run games, and my reputation preceded me at the store. Two of the players were the father and son I first introduced to D&D 4th Edition last summer at Encounters, and they’ve apparently been playing ever since! The father has also been bringing his younger daughter to play, and two more younger players were at my table as well (friends of the son, I believe). So, I’m running a table for four kids ranging from about 8 to 12 years old, plus one adult.

I don’t have kids myself, but I like kids well enough. When it comes to running games for kids, I’m enthusiastic about the opportunity! I really want to encourage the next generation of gamers, and this particular group is already pumped up. They’ve apparently been playing together at Encounters for a while, and when they saw that I was going to be running a game (knowing about my projector), they declared that they were all playing at my table. That’s a pretty good feeling! 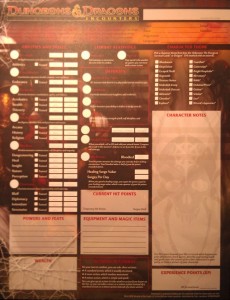 As for character creation itself, we had a fun time last Wednesday. The boys all came to the table with ideas about what they wanted to play – two hunters and a paladin. They were excited about the new races from Into the Unknown, too; I believe we’ll have at least one goblin.

The young girl at my table wasn’t sure what she wanted to play, but since she already had experience with playing a controller, defender and striker, she decided to go with the warpriest – a leader – for a change of pace. She originally really wanted to be a kobold, but when we started flipping through the books and realized that the kobold didn’t get a bonus to Wisdom she nixed that idea. This really surprised me – I thought that she had her heart set on being a kobold (and it can totally work to have a kobold cleric), but she wanted that +2 to Wisdom. So, she build a svirfneblin instead.

I spent most of my time helping her through the character creation process, and she did really well. It was fun to build from the books instead of just using the Character Builder, and I really enjoyed the custom character sheets that were provided for this season of Encounters.

DMs were also given some treasure cards to represent a very cool neck slot item, one that can pierce a drow’s Cloud of Darkness ability. I believe these were intended to be given to players who participated in an event at PAX, but since we’re in Colorado we didn’t have any PAX-goers at our store. The DM for the other 5:00 PM table had decided that giving these cards out as a reward for showing up to character creation would be appropriate, so that’s what we did. If we have new players come later in the season, they might be able to earn the item through sheer awesomeness; we shall see.

I’ve already prepped the first week’s encounter in MapTool, and I can’t wait to get going. This is going to be fun! I’ll post weekly recaps, along with the maps that I’ve created for each session. Stay tuned!