After a six-week break, I was finally able to gather again via MapTool with my wife, her brother, and his wife for our continuing adventure in Gardmore Abbey. At this point I pretty much have the entire adventure prepared in MapTool (still a few wrinkles to work on before it’s done, though), so I’m ready for unexpected twists.

As always, SPOILERS AHEAD.

The party’s current quest is to help Sir Oakley, paladin of Bahamut and scion of Gardmore Abbey, to recover three relics he needs in order to purify the main Temple of Bahamut in the abbey. Sora the dragonbornn swordmage, Homer the elf hunter and Stasi the half-elf warpriest are currently with Sir Oakley in the catacombs beneath the abbey.

At the end of the last session, they had finished a difficult battle against undead monstrosities and had found a magic fountain of Bahamut that granted some necrotic resistance. Some of them were talking about an extended rest, but they really weren’t ready for that yet (not enough adventuring). As they stood by the Font of Divine Health discussing their plans, they heard some footsteps from the stairs leading up to the Temple.

Homer crept over to the nearby door and tried to peer through the keyhole (sure, let’s say there’s a keyhole). His perception roll was terrible, though, so he could only tell that there were some humanoid-shaped creatures (more than two), that they were talking (but he couldn’t make out the language, let alone what they were saying) and that they were carrying a light source (but he couldn’t tell what it was). He decided to head around to the Memorial Chamber to spy from there, but he wasn’t very stealthy about it. As he got into the Memorial Chamber, he heard footsteps hurrying back up the stairs and saw the light around the corner getting dimmer.

The rest of the party came over to join Homer and they decided not to pursue the other people.

Though I didn’t tell them this, they had just had their first encounter with the rival adventuring party. I was supposed to have made it so that the Altar of Glory had already been cleared out by the other party when our heroes arrived, but I forgot. So instead I decided to have them come down, find the Altar of Glory already cleared by our heroes, and then skedaddle when the heroes detected them. It worked out really well.

After this, the group pressed on to a large chamber in which they could hear something heavy dragging along the floor in the darkness. 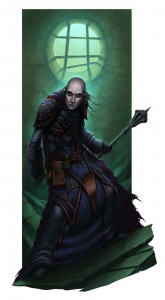 Since they weren’t particularly stealthy in entering this chamber, Vadin Cartwright called out in a cold voice, “Ah, we have visitors. Get them, friends!” This was the first Villain encounter, where a bad guy was drawing cards from the Deck of Many Things. Vadin drew the Knight, which gave him a flanking buddy. I ruled that he could use a move action to move the Knight, who would otherwise have been useless since Vadin was so far from the action.

The basilisk was the first problem. Sir Oakley, Sora and Stasi were clustered together, ripe for the basislisk’s venomous gaze. Some vampire minions soon closed to melee and started grabbing PCs left and right. Homer did his traditional chicken impression, staying out of the room and shooting from the hallway. Vadin Cartwright himself waited until the end of the second round to make his move, coming in with a terrifying howl that stunned the three melee characters.

Since stunned can be such an un-fun condition, I house rule it a little differently at my table:

OnlineDM’s house rule for stunned: A character who is stunned is dazed and cannot attack.

I’ve experimented in the past with saying that a stunned character can’t take standard actions, but if someone wants to make a heal check or take second wind or total defense as their entire turn, I’m fine with that.

In this case, Stasi used her one action to grant Sir Oakley a saving throw and then made her own saving throw at the end of her turn, so the team was back in the game quickly. Vadin was a tough opponent to hit; I ended up lowering his AC from 26 to 24 (de-soldierifying him) just because I saw that this encounter could get grindy otherwise. I also left the Snaketongue Vampire out of the fight since we had only three PCs plus Oakley (who is a full participant in combat).

Vadin drew the Donjon card when he was down to two-thirds of his starting hit points. The villain effect on this card gives adjacent enemies a -2 penalty to attack rolls, which is exactly the kind of ability I hate. Anything that results in missed attacks slows the game down. So, I changed it to an aura that gave enemies vulnerable 2 to all damage. When the Sun card was drawn later, I had the same problem; as written, it gives the villain concealment, which would be another -2 to hit. I switched this to a fiery halo that dealt 5 fire damage to the first PC to hit Vadin in melee (which, combined with the vulnerability, was painful and fun).

During the battle, Homer eventually dashed over to the niche in the wall where Vadin was keeping a vial of a strange red liquid. This vial was glowing, and Homer couldn’t resist picking it up and taunting Vadin with it. This definitely got Vadin’s attention, which was a good thing since Oakley was unconscious and on two failed death saves and Stasi the healer had just joined him on the ground. My brother in law asked if Homer could still shoot his bow while holding the stopperless vial, and I said sure. He carefully lined up his shot and critically hit Vadin! But some of the goop in the vial crept out and onto his bow hand; that’s some bad news right there.

Once Vadin had turned his attention to Homer, Sora was able to perform first aid on Sir Oakley, letting him spend his second wind, and he then healed Stasi. With all four characters back in action, they were able to take Vadin down. Oakley had no surges left; Sora had two, I believe. It was an exhausting series of fights for the party, but they had acquired three more cards from the Deck of Many Things from Vadin. They also found a magic sword and some money in a compartment in the room. The sword is called Moonbane and is an ancestral item from the Markelhay family that currently rules Fallcrest. I decided to make it a +3 sword since it would otherwise be pretty unexciting (as written, it’s +2). Sora was happy to wield it. This also switches her from a broadsword to a longsword, so she should hit more often now.

The group then spent the rest of their day holed up in the secret chamber in the catacombs, with Stasi tending to Homer. The red liquid had left Homer infected with unpleasant boils up his left arm, and he lost a healing surge. Stasi’s healing skill wasn’t very useful for Homer, but at least he didn’t get any worse. After an extended rest in the chamber, Homer woke up feeling better (a good endurance check), and the disease was cured – although he carries the scars still.

Next question: What to do about the red liquid? Vadin had raved about Tharizdun, the Chained God, and the substance definitely seemed evil. Homer and Stasi decided to pour some holy water from the Font of Divine Health in the next room into the vial to see what would happen. What happened was that the water started bubbling over, and Homer threw the vial against the far wall. The red goo seemed to have emerged mostly unscathed, and it started creeping up the wall. Sora scooped it up in a bottle that previously held a healing potion, and stoppered the thing shut.

After some discussion, the group decided to tie the bottle to a rock, unstopper it and drop it in the fountain. The font started frothing over and turning a bit pinkish for a minute or two before calming down. The magical energy from the fountain has dissipated, but the overwhelming evil of the red stuff doesn’t feel strong any more.

From here, the adventurers explored the easternmost chamber of this floor They opened a door to reveal – a curtain of dragon scales obscuring the next room! But beyond that lay more sarcophagi – and undead monsters.

A couple of ghasts emerged from the darkness, followed by a wraith surrounded by swirling winds (a vortex wraith). The curtain of dragon scales blocked Homer’s shot into the room, so Sora yanked it to the ground. The vortex wraith started off being dazed thanks to Homer’s disruptive shot, so I ruled that its aura wasn’t working at first. Once it started up, though, its automatic damage and pulling of PCs toward the wraith had a major effect on the battle. Fortunately Stasi and Sir Oakley were doing their best to keep dealing radiant damage, and Sora’s Moonbane sword was ignoring the wraith’s insubstantiality.

Meanwhile, a regular non-vortex wraith had phased through a wall to come after Homer in the hallway. He pulled out the Sun card and managed to activate it to give himself some concealment, but the wraith’s invisibility every time it got hit made it a tough fight.

Things only got worse when a second vortex wraith joined the battle in the third round. Sir Oakley finished off the first one, which promptly exploded, sending the party flying all over the place. The one remaining vortex wraith focused on Sora, bringing the dragonborn to the ground briefly before she was rescued by Stasi and the wraith was at last destroyed.

Once all of the monsters were dealt with, the explorers discovered one of the relics Sir Oakley had been seeking – the Bowl of Io’s Blood. Huzzah! A great victory was shared by all.

I’m still having a ton of fun with this adventure. Ad-libbing the reaction of the red goo to the holy water was lots of fun, and I plan to have Homer’s scars from the disease come into play in the future. The mystery of the other people investigating the catacombs has worked out beautifully. And with five cards in their possession, the group is much more interested in and aware of the Deck of Many Things and its power. Now that I have almost everything prepped in MapTool, I’m ready for whatever they want to do next.