Among the big, exciting news in the world of role-playing games this past month was the release of the Marvel Heroic Roleplaying Game from Margaret Weis Productions. Cam Banks (@boymonster on Twitter) was the design lead, and by all accounts he and his team had done a fantastic job with the game.

I’m not a comic book guy myself, so I wasn’t really planning to do anything with the game. However, I was asked by a couple of folks on Twitter (@MattHawke and @SenatorChatty) if I would be willing to put together a Marvel RPG framework in MapTool so that they and others could play the game online.

Hmm, intriguing! This is the closest I’ve come so far to doing “commission work” in role playing games (although I’m not getting paid or anything like that).

One stumbling block was that I did not own the PDF for this exciting new game. Now, it was only $12.99 on Drive Through RPG at the moment (now marked down to $9.74 for DM’s Day through March 7), but still. If I wasn’t going to play the game myself, I didn’t really want to have to pay money to do commission work.

Inspiration struck, though: Why not ask the game’s creator if he’d like me to put this together as a service to the online Marvel RPG community, and in exchange he could provide me with a copy of the PDF. Brilliant! Cam, being the awesome guy that he is, agreed.

And thus, the OnlineDM framework for the Marvel Heroic Roleplaying Game was born. You can download it right here.

I’m calling this particular version 0.11. It’s not at all polished yet, but it does work. Some instructions:

– The framework was created in version 1.3.b86 of MapTool, but it should work in any later version, too.

– There are three tokens: One for a hero (which can also be used for villains), one for The Watcher, and one for the Scene.

– The Hero token has all kinds of properties that will pop-up on a mouse-over; the Watcher and Scene are more limited, naturally.

– To build a Hero token, click the Build Character macro on the token itself and enter the various characteristics

– To build a dice pool, either click the Build Dice Pool macro or click the individual add/remove dice buttons

– To roll the dice pool or clear it, click the button labeled as such

– There are also buttons to set Stress, Trauma, Assets and Complications 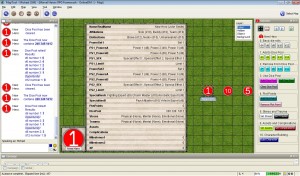 Click to enlarge to see the framework's features in action

Admittedly, this is not very pretty yet, and there are things I’d definitely like to tweak.

– Following a suggestion from @MattHawke, I’d like to use a custom frame instead of the pop-up character sheet to hold all of these properties. It really needs more formatting.

– In the dice pool building macro, I’d like to have drop-downs to pick the actual Distinctions and Powers and so on, rather than just typing in a number of dice

– And I’m sure that play-testing will reveal lots of things that need improvement!

Still, this version should be functional for play. All you really need are the dice pool and doom pool macros.

So, try out the new game and try out my framework – and let me know what suggestions you have for improvements!

– Note that you’ll need to set your stack size in MapTool to at least 4 in order for this framework to work properly. I personally set mine to 10. This is an option in the pop-up window that opens when MapTool first starts. The default stack size of 2 doesn’t cut it.