I may be insane, but I’m currently running three different D&D campaigns.

I have my long-running Friday night game online via MapTool and Skype in the War of the Burning Sky campaign saga from EN World. Awesome game, awesome people. We play most weeks (I’d say 3 times per month usually), though we’ve just come back from a six-week break. I should probably write more session recaps of this game, but I have to admit that I don’t.

I have my family campaign in Madness at Gardmore Abbey. We’re four sessions in, and I’m liking the campaign so far. That one, too, is online. I’ve been writing recaps of that one regularly.

And then I have the campaign I run for my friends in-person. We’ve just finished our third session in the ZEITGEIST campaign, also from EN World, which brought us to the end of Adventure One.

Session one of Zeitgeist (I get tired of typing it in all caps, as it’s technically written) was on Christmas Day. We gathered at my and my wife’s place around 1:00 PM and started by playing some board games. We then moved on to Christmas dinner and, since my wife needed a nap, a game of Taboo. Finally, we moved on to Dungeons and Dragons.

We had already done character creation a couple of weeks earlier, using rolled stats (my first time doing so in 4th Edition) and the character themes in Zeitgeist to tie the characters to the setting. The themes are a fantastic idea. I had never used themes before, since I see them largely as power creep and things that are likely to slow the game down with more choice paralysis on the part of players. But in this case, I love that they give PCs an automatic place in the world of Lanjyr (the land where the campaign is set). I think that Zeitgeist DMs should STRONGLY encourage their parties to take these themes.

You down with RHC? Yeah, you know me.

The PCs in this campaign begin in the employ of the Royal Homeland Constabulary (RHC), a sort of CIA / FBI / special forces unit for the country of Risur. Magic and technology both exist in this world, though technology is just starting to come into its own. Assignment number one in the campaign is for the Constables to help out with security at the launching of Risur’s first steam-powered warship, the RNS Coaltongue (a fun nod to a character in the War of the Burning Sky campaign).

A skill challenge to case the crowd, looking for troublemakers, has the potential to end up in a fight, though my players did a good job and avoided combat here. There were some good role-playing opportunities, and I tried hard to bring my players into their characters via their interactions with NPCs. One PC wanted to recruit a local cop to help with a task, so I gave him a cop and asked him to name the guy. This is something I did again later in the adventure, and I encourage it – when you get a new minor NPC, let the player name it.

Soon the king and other nobles arrive to board the Coaltongue, letting the party learn a bit about the politics of the world. My wife’s character, a rare eladrin female in this world, decided to make friends with the beautiful handmaiden of the king’s sister, Duchess Evelyn. Our dwarven knight tried to endear herself to the Duchess. And so on. 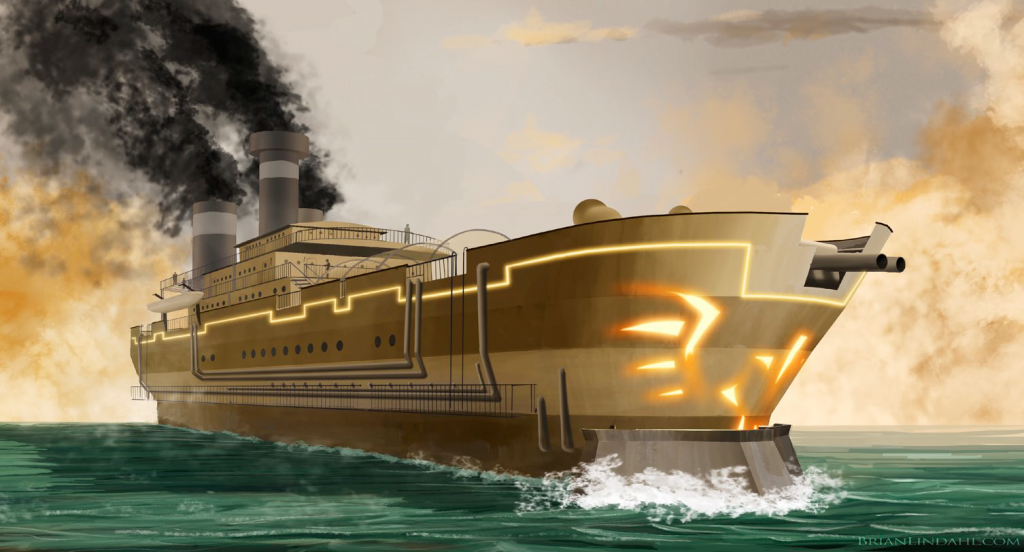 Once on board the ship, more chances for role-playing and exploration came. Then there came a moment where some of the PCs were asked to go check on the Duchess, who had gone below deck to take a nap and hadn’t come back. Some of the PCs went to check on her, while others remained on the main deck. The handmaiden called through the door of the Duchess’s cabin that the Duchess was still sleeping, and she refused to open the door. Eventually, the PCs heard a splash through the door, as if someone had jumped or been thrown out out a window, and they decided to bash their way into the cabin.

And at just that moment, the brass band on the main deck started playing the Risuri national anthem, drowning out any sound from below. Roll initiative.

This was a very cool way to run a combat; hundreds of dignitaries above, oblivious to the chaos below as individuals led by the handmaiden tried to sabotage the ship’s boiler in an effort to blow the whole thing sky-high. The fight spread over multiple decks and involved not just straight-up combat but also efforts to restore the magical wards to protect the powder magazine as well as the skills needed to deal with the sabotage before everything exploded. The adventure comes with a cool mechanism for tracking how close the boiler is to exploding, though it definitely needs a good DM to tweak it on the fly.

The party eventually found success, saving the ship, and the band played on. Thus ended session one, which was Chapter One of the first adventure. It was rousing day of fun all around, and had us looking forward to session two.

2 thoughts on “ZEITGEIST Session One – Review and Recap”